Oil has fallen by almost 5% since market open on Monday with prices trading at levels not seen since September.

After falling by almost 5% since market open on Monday, oil prices fell to trade at levels last seen in September. This was due to the supply fears subsided but worries about fuel demand from China and the strength of the US dollar kept prices down.

Brent and WTI oil, the two benchmarks, both finished Friday at their lowest levels since September 27th, continuing their recent downward trend. U.S. crude oil is down 10%, and Brent oil is down 9%.

With outbreaks in both Beijing and Shanghai, where localized lockdowns were once more in effect, China reported its first COVID-19 deaths in recent months, including three in Beijing. National case numbers also increased past their April highs.

If the current round of COVID cases forces a return to more restrictive mobility policies, China’s domestic demand of oil is expected to decline significantly. This increase in instances prompted influential investment bank Goldman Sachs to reduce its fourth-quarter projection for Brent crude oil by $10 a barrel to $100, the second reduction since September.

You may also read: Fear over demand outlook pushes Crude Oil down

The U.S. Dollar Index, which measures the value of the dollar against a basket of six different currencies, increased on Monday to reach its highest level since November 11th. The strengthening of the currency, which increases the cost of the oil commodity for overseas customers as it is priced in dollars, also had an impact on the oil market on Monday. U.S. dollar being stronger is actually a bearish sign for oil prices.

According to unnamed delegates within the group, the Wall Street Journal reported on Monday that Saudi Arabia and other OPEC oil producers are debating raising their output. For the OPEC+ meeting on December 4th, an increase of up to 500,000 barrels per day is currently being discussed.

It would be however unexpected to increase production during a time of falling prices and anxiety over the future of the economy, as last month OPEC+ decided to reduce the output drastically. The de facto leader of OPEC+, Saudi Arabia’s oil minister, was quoted saying earlier this month that the organization will continue to exercise caution. Recent days have seen a decline in physical crude markets as a result of weaker demand from China and Europe 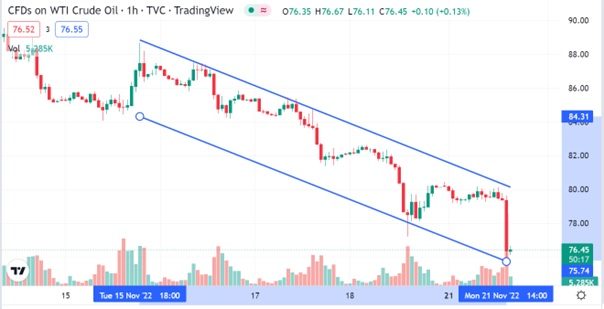 WTI continued its downward trend in the US trading session from $80.20, where we can see a new resistance forming after a greater selloff at the beginning of the session. Price fell as low as $76.10, where we see a potential for new support and a rebound correction to continue the trend.

Read also: Are metals ready to extend their rally?