WTI is uncertain – waiting for the next move

For the past few weeks, we could see rising tensions at Ukraine-Russia border. Markets are nervous. Volatility is higher than usual. While it seems like there is no winner at this point, the markets are showing otherwise.

Crude oil benefiting from the uncertainty

There is one clear winner of this conflict and that is crude oil. The chart below shows massive uptrend for WTI (CL futures contract on NYMEX). 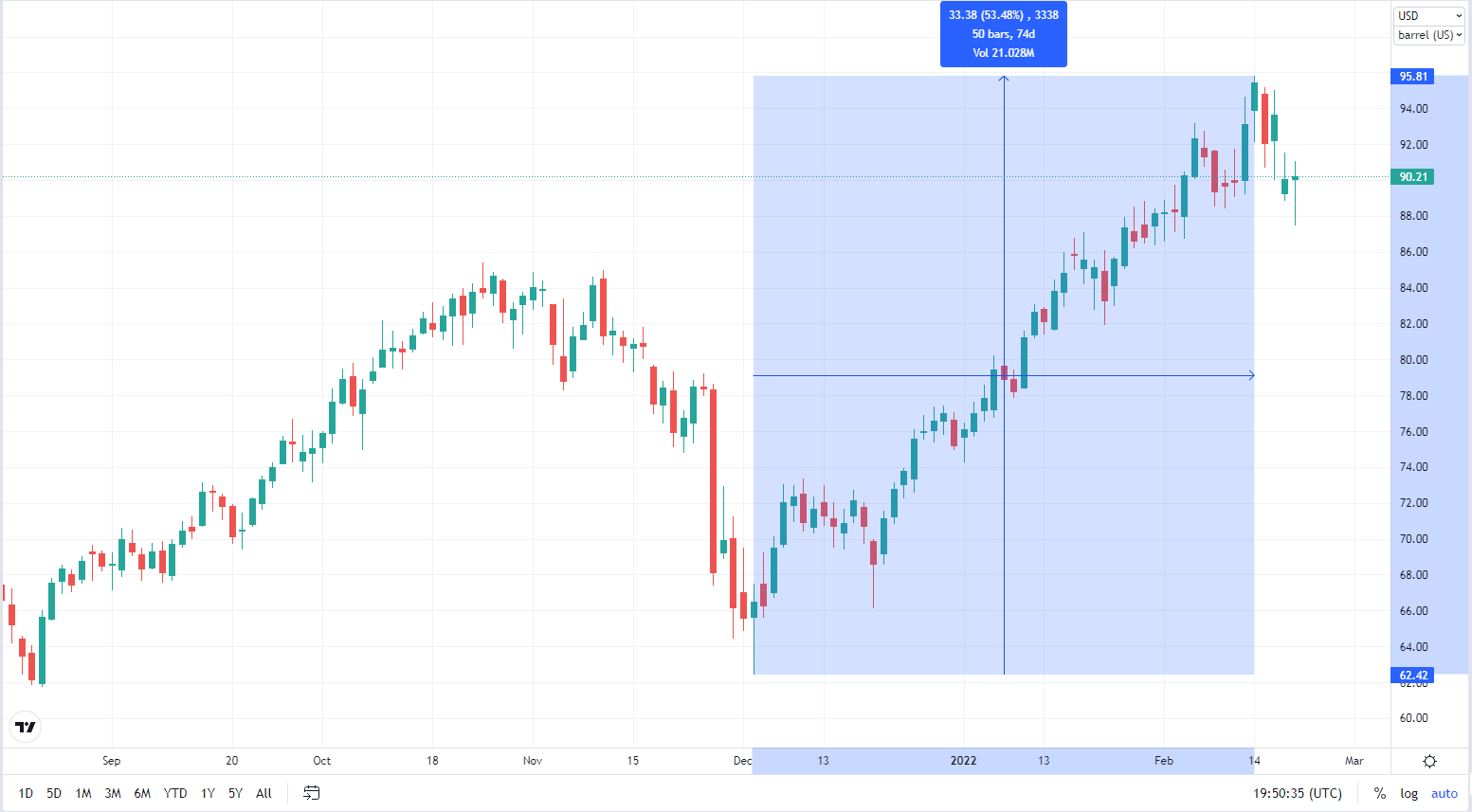 This trend is measured from the beginning of the December until today. Low is set on 62.43, but high of this move is lying on 95.82. The price increase is about 53.48%. Between these two price levels are only 50 days.

Possible war conflict is not the only factor affecting the price of commodity. OPEC+ is not capable to achieve demand satisfaction by boosting production, inflation is rising, and Iranian nuclear deal is also not helping (yet). The last problem could be quite interesting.

Briefly, Iran nuclear deal stands for trade to relief sanctions on Iranian oil export for limits on Iran’s nuclear work. Talks among 7 countries: UK, Germany, China, France, Russia, USA and Iran, are currently heading to the finish line. Let’s not forget that Iran holds the fourth-biggest crude oil reserves in the world, which shows, how big of a player it is and how important this deal appears. All concerned parties see the end of February as time to reach a deal.

Effect of, for now highly, possible agreement could be knock-on on the WTI prices. As mentioned before, Iran has the fourth-biggest oil reserves. Analysts see possible boost of oil production to 500 000 barrels a day for first few months, which can grow to as much as 1.3 million barrels by the end of the year. Moreover, Iran has around 85 million barrels just in storage at the sea, between tanks and tankers around the world. Those numbers are very significant for the world oil market.

Be aware that possible war conflict is not only affecting factor on WTI prices. Firstly, war has not started yet. There is still space for negotiation. Secondly, it is highly possible that Iran nuclear deal will come to an agreement.

After a long uptrend mentioned in the first half of this article, last week was mostly neutral and all support and resistance levels are very narrow. Volume is predominantly cumulated, and traders are waiting for any spark to move. Monthly VWAP (Volume-weighted average price) shows support at 89.14, 87.08 and 85.50 levels. 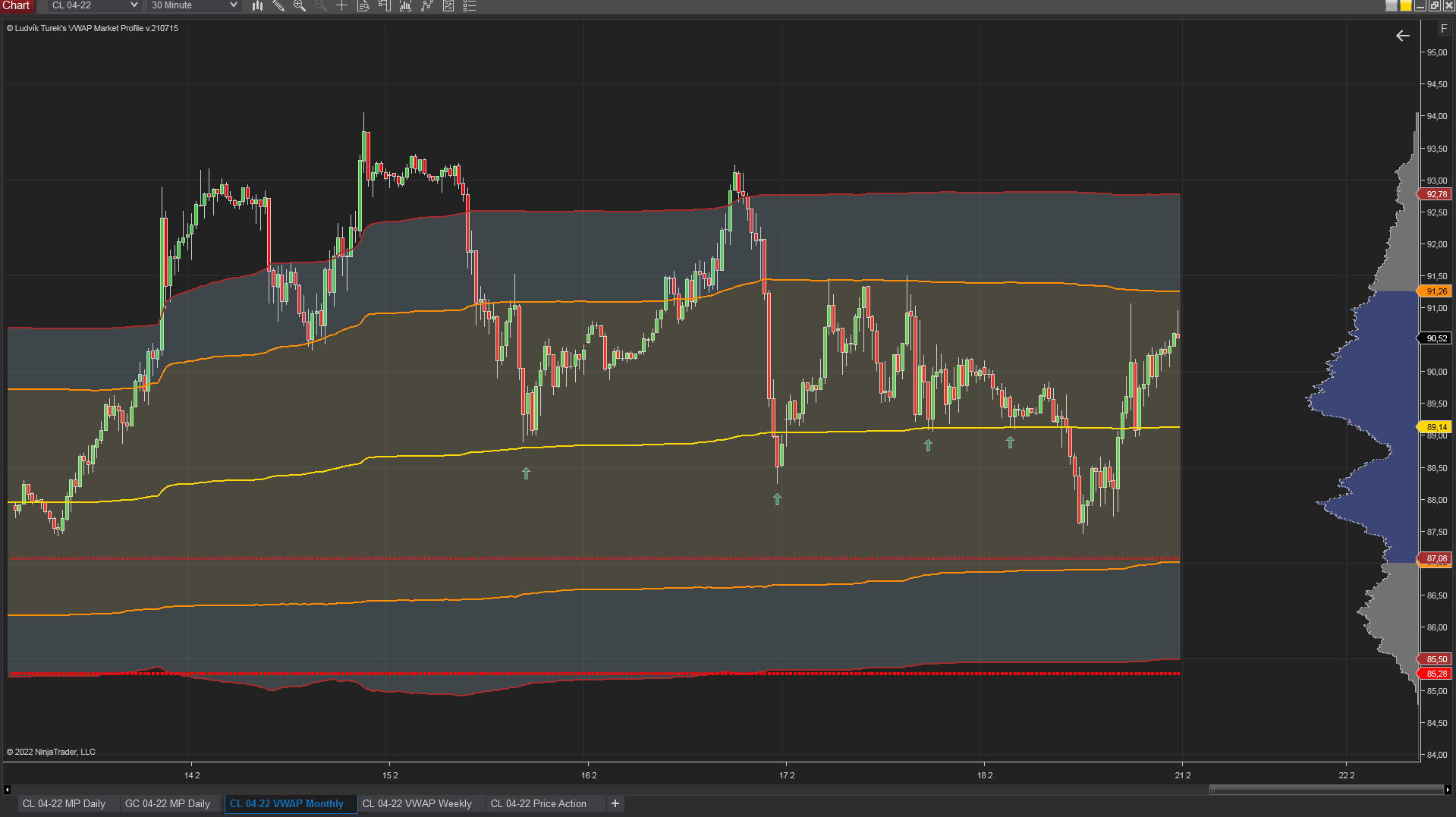 From the last week, VWAP yellow line worked as support numerous times marked by arrows. Resistance level is set on 91.26. 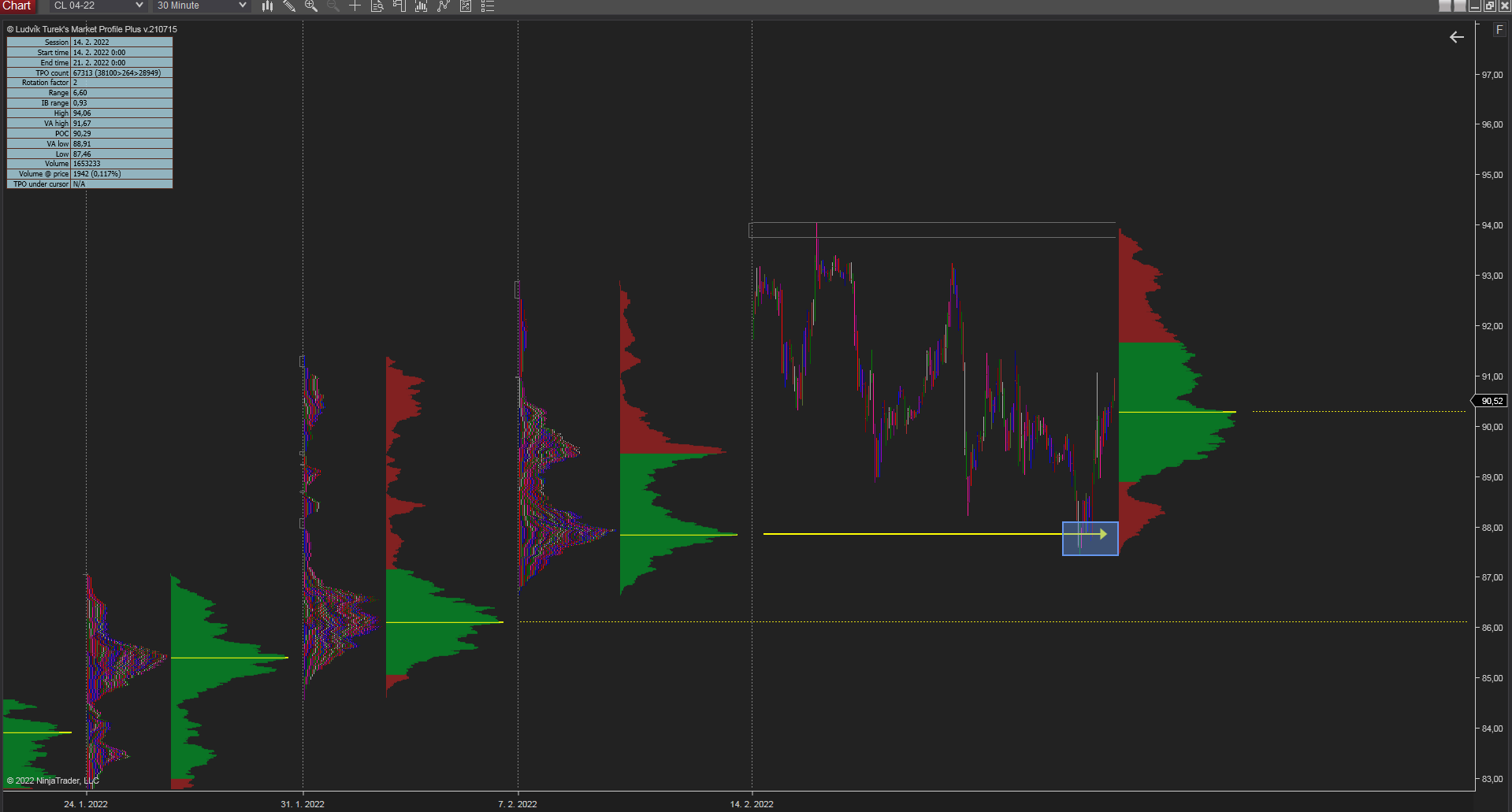 Weekly Market profile shows POC (Point of Control) level at 87.84, which was tested last Friday. Next support is at 86.11 level.

Therefore, the overall market outlook does not have to be as one-sided as we think. Of course, beginning of the war could be enormous spark for commodity prices going up. On the other hand, no war conflict and reaching up the nuclear deal could have knock-on effect on WTI price level.