Will ads save or destroy Netflix?

In the last few years, Netflix has become a rock star in the stock market, but rising competition caused Netflix to reconsider its setup.

There is a negative sentiment toward Netflix as its growth allegedly slowed down and competition rose fiercely. That made a lot of investors wonder if Netflix still has a future or not. So let’s have a look at what’s really going on.

Netflix started in 1997 as a mail-based rental business for several years selling or renting DVDs. Netflix was competing with Blockbuster in the early 2000s, but later shifted its focus toward subscription services. In 2007, the company transitioned to video streaming services, which became one of the best decisions as Netflix has become the number one streaming company.

Related article: Anyone can now bet against Jim Cramer with new Inverse ETF

From then on, it only started to take off year by year, which helped Netflix grow into a $350 billion company by the end of 2021. Netflix delivered fantastic returns over the years, attracting many new investors and making it a noticeable player in the market. Netflix (NFLX) stock was not so successful throughout the 2000s, but the 2010s made history. In 12 years, Netflix grew in value by about 10,000%.

The rising competition made a lot of investors sceptical and dumped NFLX shares. Amazon Prime Video, Disney+, HBO Max and other subscription-based companies that offer movies, documentaries or TV shows have grown rapidly over the last couple of years. This niche conquered the market as over 85% of US households have at least one subscription to a video streaming service.

Netflix was and still is the number one company in this field, but others are quickly catching up as many people are changing Netflix for its competitors. Or new subscribers choose competitors over Netflix. The skyrocketing increase in the stock price and the number of subscribers found their temporary peak at 220 million, which caused the massive fall in the stock price along with the crisis.

The current recession may drive the stock price even lower, but Netflix is finally entering a fair-value as its P/B ratio is not sky-high, but sits at 5.36 and its P/E is at 21.52. Some factors make the stock still risky, but after it drops by about 70% in value, it becomes attractive again.

Its yearly revenue is still ascending at a fast pace and earnings are rising. Even this year is not bad, as Netflix made $7.87 billion in Q1 and $7.97 billion in Q2. The earnings reports of Q3 will be announced on October 18th, which will point to another direction of the stock. 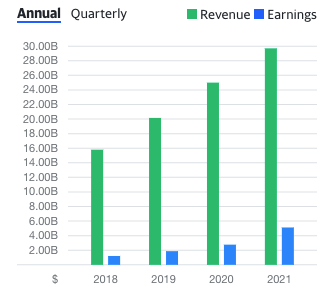 While ads may hurt Netflix, only 16% of respondents said it would make them switch to another video streaming service. Ads thus may hurt Netflix, but it is not necessarily the end of the company. The society is used to ads everywhere, and if Netflix doesn’t overdo it with advertising, it should be fine. Even though the company could lose 16% of its customers, Netflix could bring billions of dollars by selling ads.

Netflix ads are expected to come at the beginning of 2023 and help the company continue to prosper. In 2023, the segment’s advertising sales could reportedly bring $600 million in total. Anmuth anticipates a rise in those figures by 2026 as Netflix’s ad sales strategy becomes more effective.

Anmuth predicts that by 2026, Netflix’s US/Canada market will have 22 million customers and generate $2.65 billion in advertising revenue. As the subscribers’ growth has muted over the last few months, advertising could be a critical step to accelerate revenue in the company.

While ads alone won’t save Netflix from failing, they might help drive higher revenues. However, the company needs to do more than that to survive in this competitive market.