There are many bullish and bearish theories, and most of the arguments of either side are reliable. However, during the last week, we have monitored the absolute bearishness from almost everyone. The sentiment is extremely bearish. We also analyzed the S&P 500 (SPY) last month and revealed a bearish thesis. S&P 500 has dropped by 9-12% since then.

Now we are changing our short-term view. Partially, we’ve shown that we’ve “changed our minds” in the last week’s report, but now that many extremes have happened, we’re more sure of our thesis.

Related article: Here are 3 reasons why stocks may continue to dive

The market just needs the trigger

Such a trigger could be, i.e., a better than expected “inflation print” for September, whereas some inflation-leading indicators showed a strong improvement in prices. The issue is that the market has started to be very volatile, and yields rose so much in the previous week, so there are some risks. Market participants are beginning to panic, which is dangerous because a further decline is possible, but it also indicates the possibility of a short-term rally.

The S&P 500 (SPY) fell as both nominal, and real yields (orange) increased significantly. However, now it reaches great extremes in the very short term and could ease a little bit in the following days/weeks and cause a short-term reversal in the stock market. However, there is a risk of another extreme. As the S&P 500 is testing June’s low, for big players, there is an opportunity to catch the liquidity just below the June lows.

From the macro perspective, the situation is worsening, because the Fed is confident about the hiking cycle and plans to deliver further hikes to slow down inflation. It will happen, but we believe that they also wanted to deliver and let the markets know that they are really serious.

Negative sentiment is near a peak

If they were placed alone, we would summarise it as a strong signal to bet on reversal, but now they are combined, thus indicating a more certain move for us. But this does not rule out that the market will not make new lows during this week, as the sentiment is very negative.

This great indicator, which measures the number of short-selling volume, is useful as a contrarian indicator. The 10-day average suggests that current short-positions are the highest since 03/2020 (COVID-19 panic). If these shorts closed, it would suggest a bullish rally as we saw in August. The positive sign is that there are some bullish gaps, which need to be filled, both on the QQQ (Nasdaq) or SPY (S&P 500) charts. 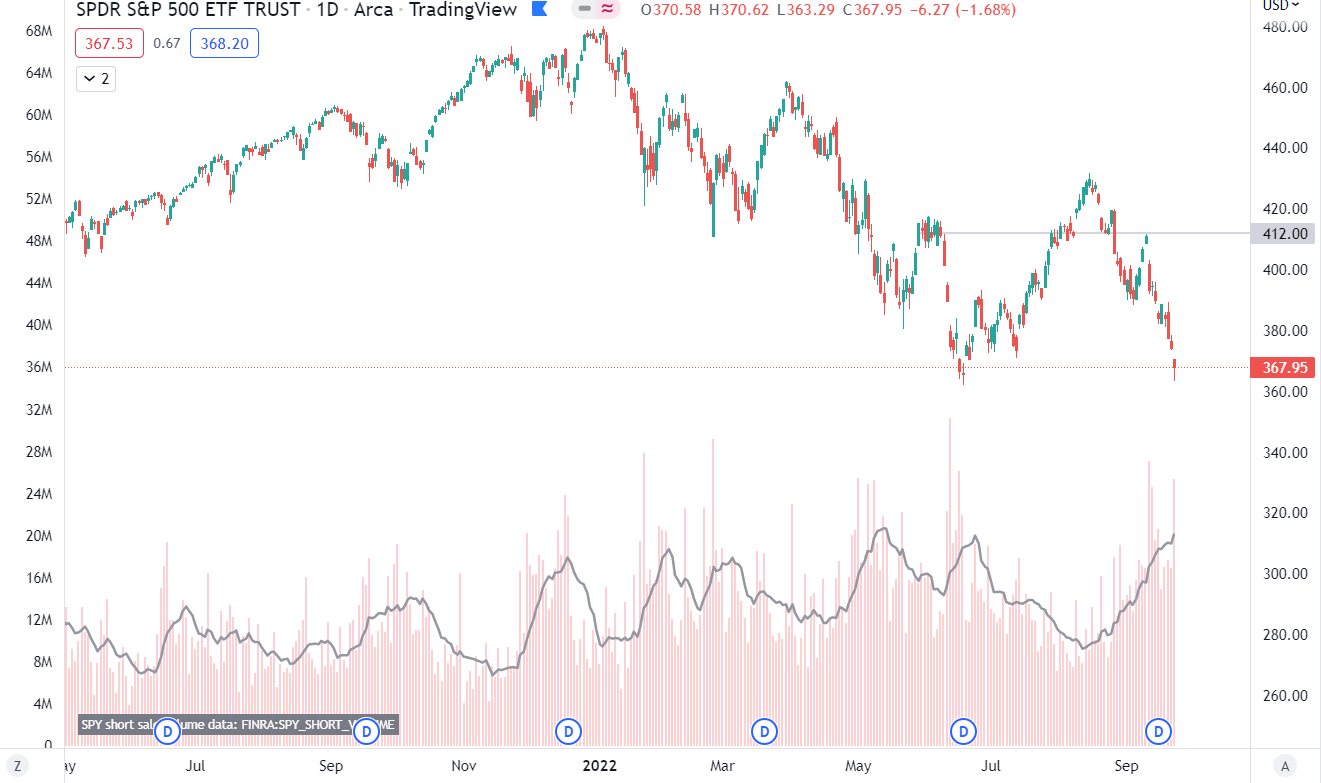 The highest put volumes ever recorded

One of the best options tools to measure is the call-to-put ratio, or the absolute number of calls or puts. According to Bloomberg, “put volume spikes to a record amid equity losses”. This also serves as a good contrarian indicator and agrees with the logic that most shorts are opened at the end and most calls are built in the extended bullish market. 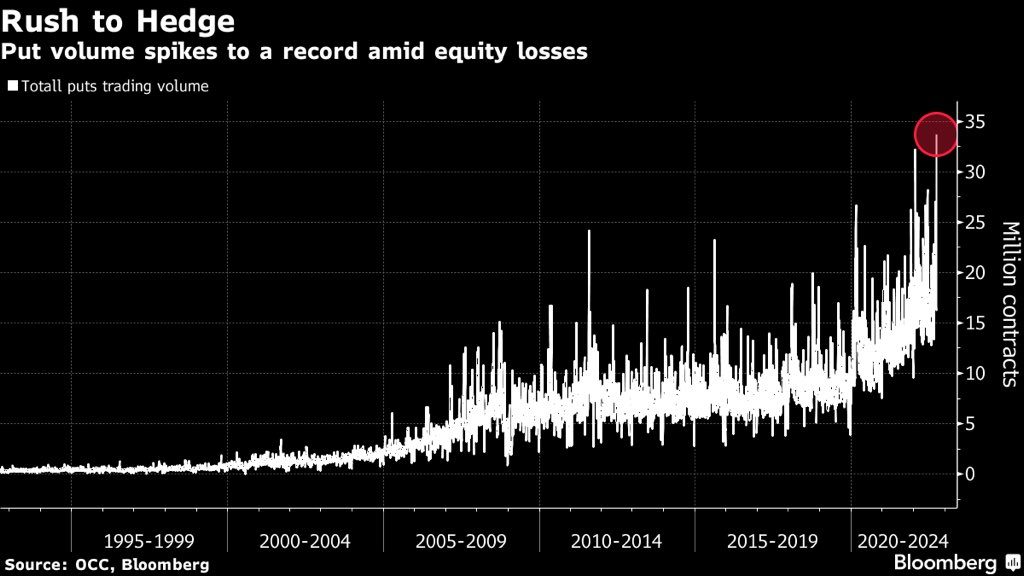 This bearish rally is not a rare one. But there are only 7% of stocks that are above their 20-day moving average. This indicates that in the very short-term, the market is extremely oversold. As we saw previously, it can still go lower, which would fit with the narrative about breaking to new 2022 lows, but also such levels are tradeable.

There is a great survey (AAII), which measures the bullish, bearish, and neutral sentiment of the market in real time. In the current view, sentiment is absolutely bearish; almost every expert is bearish, and market sentiment as well. According to AAI (Bloomberg), the sentiment is the most bearish since 2008. This indicator is also contrarian in the short-to-medium term and supports a bullish thesis. 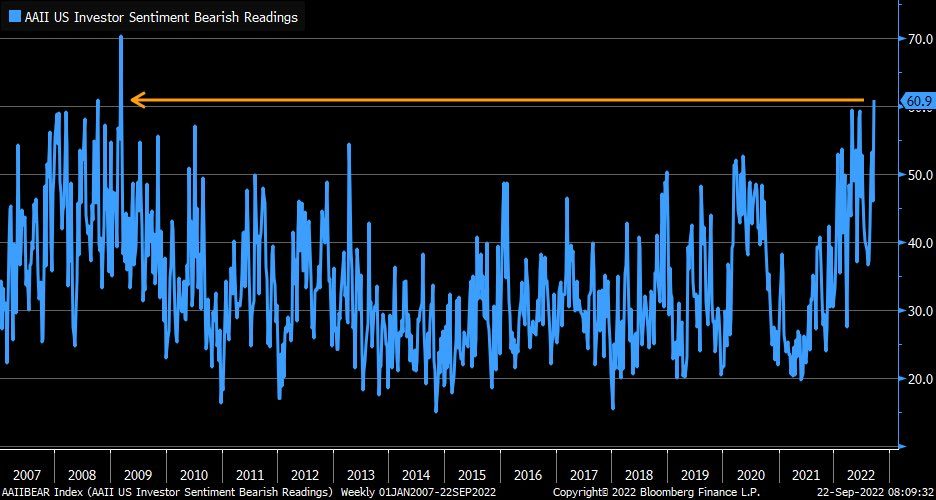 As stated numerous times in the current weekly macro report aimed at the sentiment, we remain bullish on the S&P 500 in the very short term. The issue is that the market can still make new lows, which would be very logical for big players. However, it would be a good strategy to allocate to the stocks and sell the rally if possible. We don’t know what the market will do, but with current levels of VIX and bearish sentiment, the market could be very aggressive to the downside. However, we revealed many indicators which stick to our thesis.

Suggestion: Did MIT invent a new type of cheap battery?

Short-selling volumes (10-D average) are near extremes, puts are at extremes, the number of stocks above 20-D-MA is near extreme levels, and sentiment is very bearish as well. New lows are possible, but we remain bullish on the S&P 500 in the short term.