Weekly macro report – Do not expect dovish result from FOMC

This week was a little crazy. There was plenty of volatility impacted by earnings season, which led to upside and downside movements mainly in the stock market.

As we mentioned in our last macro report, we expected a bullish rally both in the bond and stock markets, despite earning season. However, we were aware of the upcoming Q3 results. In the bond market, we see mainly the impact on the long-end of the yield curve, where we see a quite sharp decline, mainly in Europe due to the following ECB result. The ECB pushed the market with a less hawkish, or more dovish, stance. The stocks continued to bounce significantly in Europe, but in general, the overall loss on Thursday has been fully erased by Friday’s rally.

Have the central banks started to ease the conditions?

During the previous week, many things happened. Until Wednesday, the market, as measured by bond and stock market prices, had rallied primarily due to “less hawkish” stances from many central banks (members) around the world. Moreover, the bond added some aggressive gains. The Bank of Canada was among the first to deliver a “less hawkish” stance by hiking to 3.75% when the estimates were set at 4.0%. The ECB was followed not by the hike view, which was different than market expectations, but by slightly more dovish forward guidance (than expected):

“We think it will take several meetings,” she said. “How many is several? It’s probably more than two, including this one, but it’s probably also going to be less than five,” Lagarde said, suggesting that rate hikes could continue into early 2023.

In other words, as this one meeting is already included, the ECB will hike at the 1–4 following meetings. Our analytics team thinks that the ECB will continue to hike again at its next meetings, but the increases will be much smaller.

Maybe you are asking how the hell this is a “less hawkish” stance? Following the BoC and the ECB’s choice of words (during the press conference):

“What I am telling you now is that we have made progress on that normalisation path, but that we still have ground to cover, okay? As we have made that progress, I am also telling you that the ultimate destination that we want to reach is the rate that will deliver the 2% inflation target in the medium term. That rate, by the way, is not necessarily the rate at which we will have considered that normalisation is completed. It may well have to go beyond that, but what I am also telling you is that we are going to decide meeting-by-meeting on the basis of data and using the three categories of considerations that I have mentioned. So it might well be several meetings.” 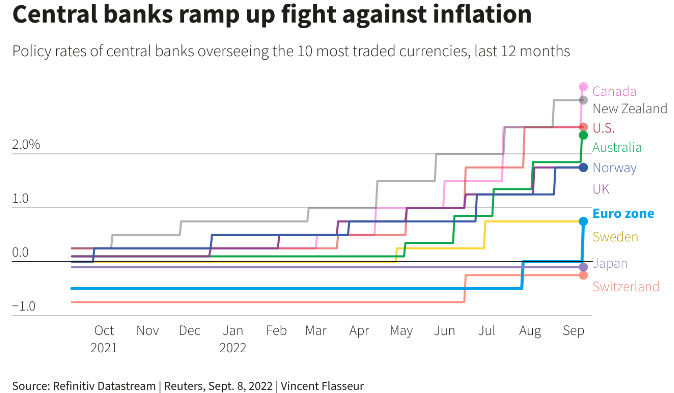 The ECB raised “main” interest rates by 75 bps to 2%. The ECB confirmed they will continue, but in our view, we will not see another 75 bps, but maybe 50-25 bps one, followed by a further deceleration in rate hikes. We believe that Europe, and even the rest of the world, cannot sustain such an aggressive posture indefinitely. In the table below from MacroMicro from IMF Dataset, we can see that the IMF expects the countries’ deficits to continue in 2022.

It is logical, because the countries need to fight against and also support the energy crisis and high inflation. Briefly, the issue is that if central banks continue to tighten with hikes and QT, these deficits won’t be fully covered by the private sector. Or maybe it could be done with higher yields. Although the deficit to GDP in 2022 could be monitored as a “small” one, don’t forget that it is expected that GDP will increase in many countries. These deficits are high once again.

There would also be issues with debt servicing if this “hiking” trend continued. Our team does not say, that the central banks will stop tightening immediately. but that central banks will be much more cautious right now, because any additional increase is increasing the probability of recession or that something in the economy can break easily.  Just like the BoE case (liquidity provided) and resersal of “easing of fiscal” policy to maintain financial stability.

It is a medium-term strategy, and this is only one of the many “keypoints” (also with debt to GDP) that lead us to the conclusion that central banks won’t be as aggressive and for such a long period as they actually are presenting.

Despite deficit, the Fed remains hawkish

There are some reasons why we believe the Fed will still be very hawkish. First of all, there had been a minor dovish stance from FOMC members during the previous weeks. The inflation MoM is still high, and now even the medium and long-term inflation expectations have increased quite solidly. That’s all despite the lowering of oil and natural gas prices. This week’s rate should be “deal done” as there have been some statements that the Fed will deliver a 75 bps hike.

You may like: Glencore – What do its results tell us about the market? – Investro.com

However, as we said previously, the following meeting—probably the December one—can bring 50 bps. It all depends on the data, but one thing is certain. The current rates will be  above neutral rates, and thus every additional hike needs to be considered very cautiously. Look at the current medium-term inflation expectations, which are all above the 2% target. The 5y5y forward inflation expectation rate is at 2.4%, while the 5y breakeven inflation rate sits at 2.62. These rates are not declining so far, so the medium-term outlook for the Fed will remain hawkish. 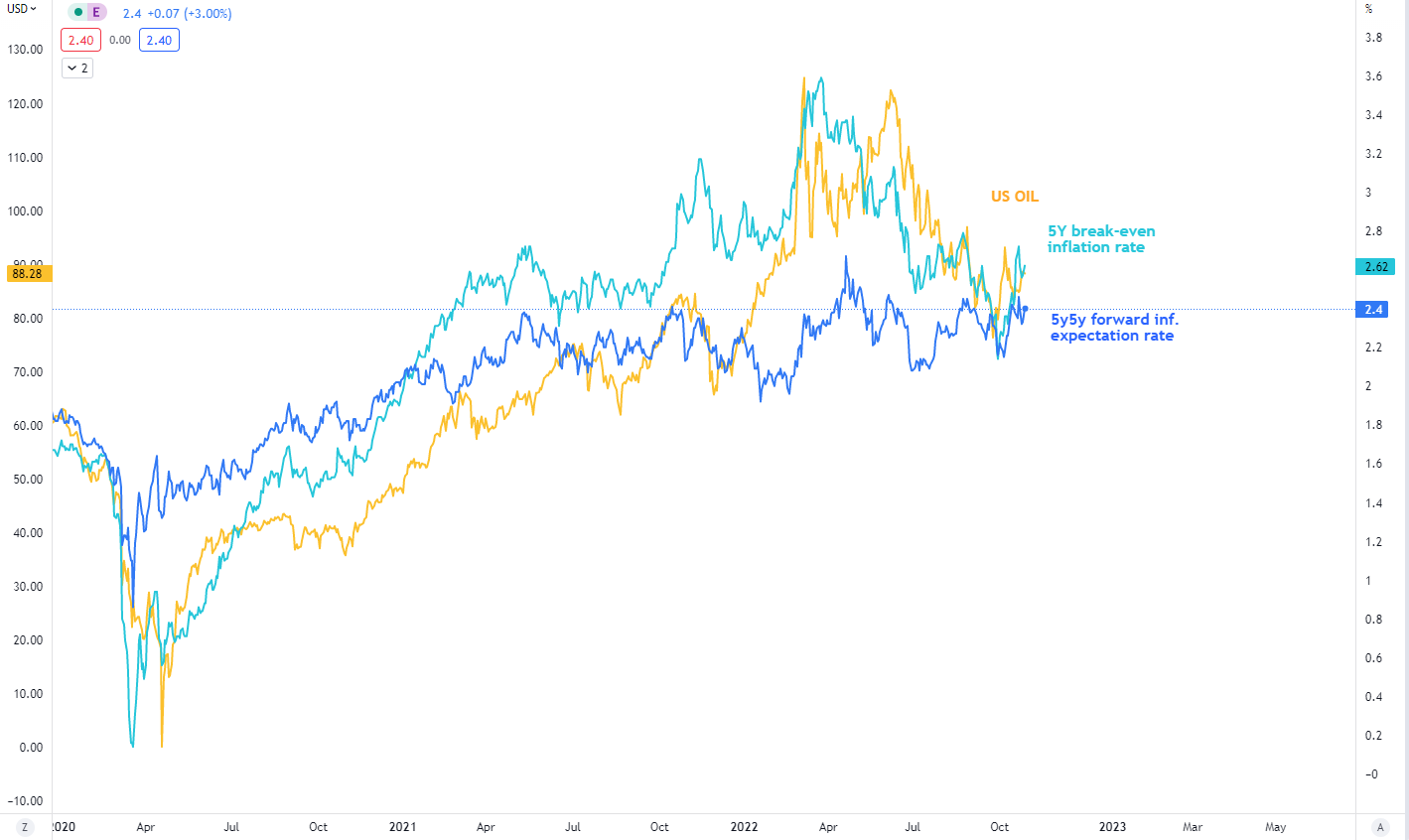 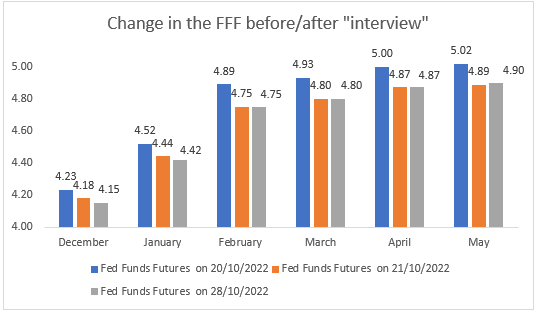 This week, all rates repriced slightly lower, but on Friday, the market “removed” all the easing. It’s quite funny because both the front-end and long-end of the yield curve all increased upwards, so bonds removed some gains from the week. However, the stock rallied significantly. Despite Amazon and Meta’s negative earnings, Apple saved the day, which is why the DJI and S&P 500 rose so sharply. However, real yields rose, implying that the stock market move was likely caused by a short-covering (closing shorts) rally, which will not last long—all depends on the FOMC meeting next week.

The chart below shows a brutal deviation of correlation between the VIX and MOVE (=VIX but on the bond market) indexes: 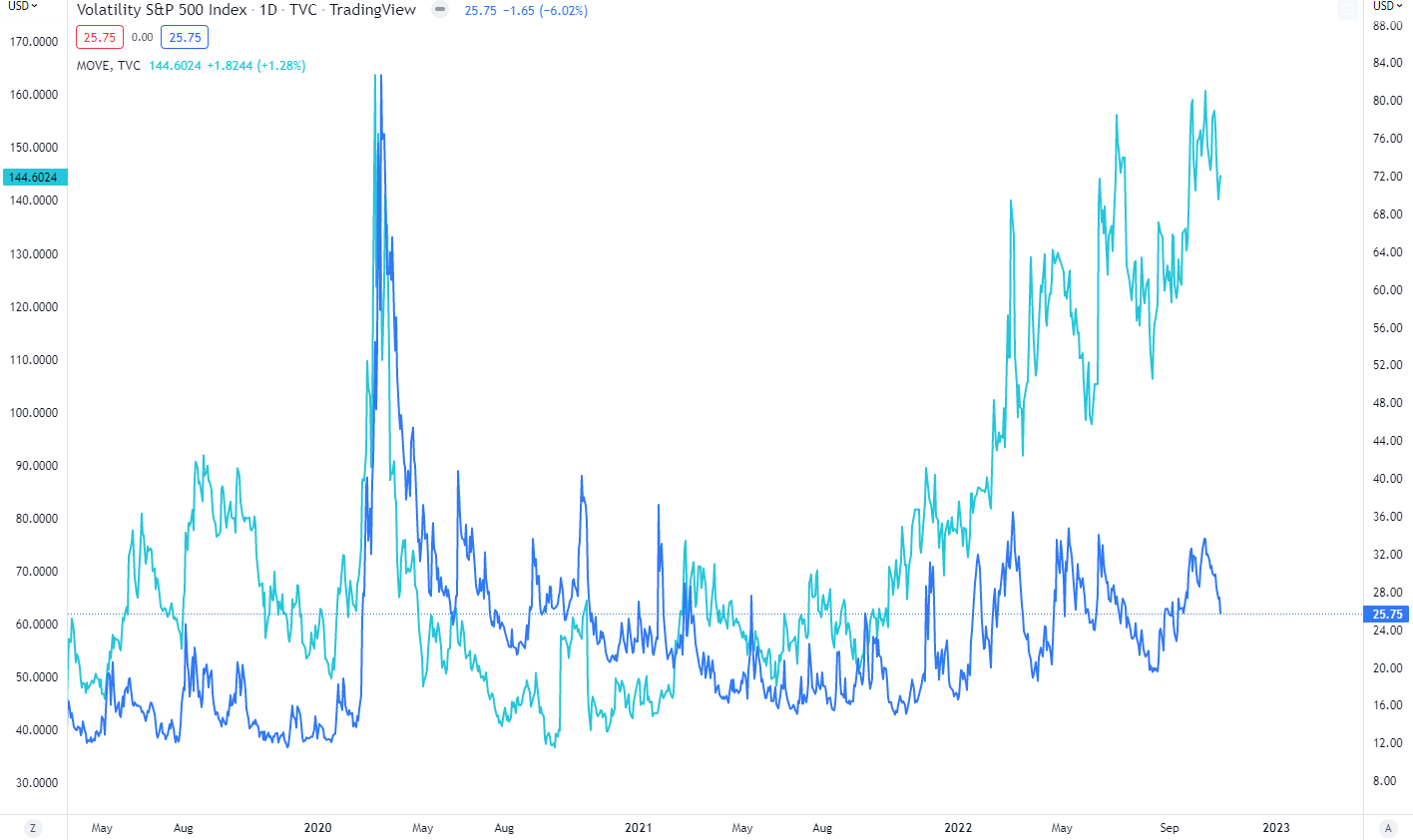 However, in the last several reports designed by our analytics team, we have been aimed at the short-lived bear market rally. It did happen, and the S&P 500 is currently up 7-8% from its lows, but currently, there is no good entry point for long positions. Despite the bullish rally on Friday, the risk/reward set-up is exhausted. It would be better to close such a trade.

With some certainty, the gains could follow on Monday due to price action, but currently we see a much better “odds opportunity” on the reversal – a bet for short trade. With some great hedges, it could make sense to enter before the FOMC meeting and the decision. The most likely opportunity, in our opinion, is a short trade on DJI because a short-term deviation from the 30 day EMA reaches the extremely rare levels of 6.6%. As a result, we see potential for a reversal trade with a short position. However, this is not a recommendation, just our analytical point of view. 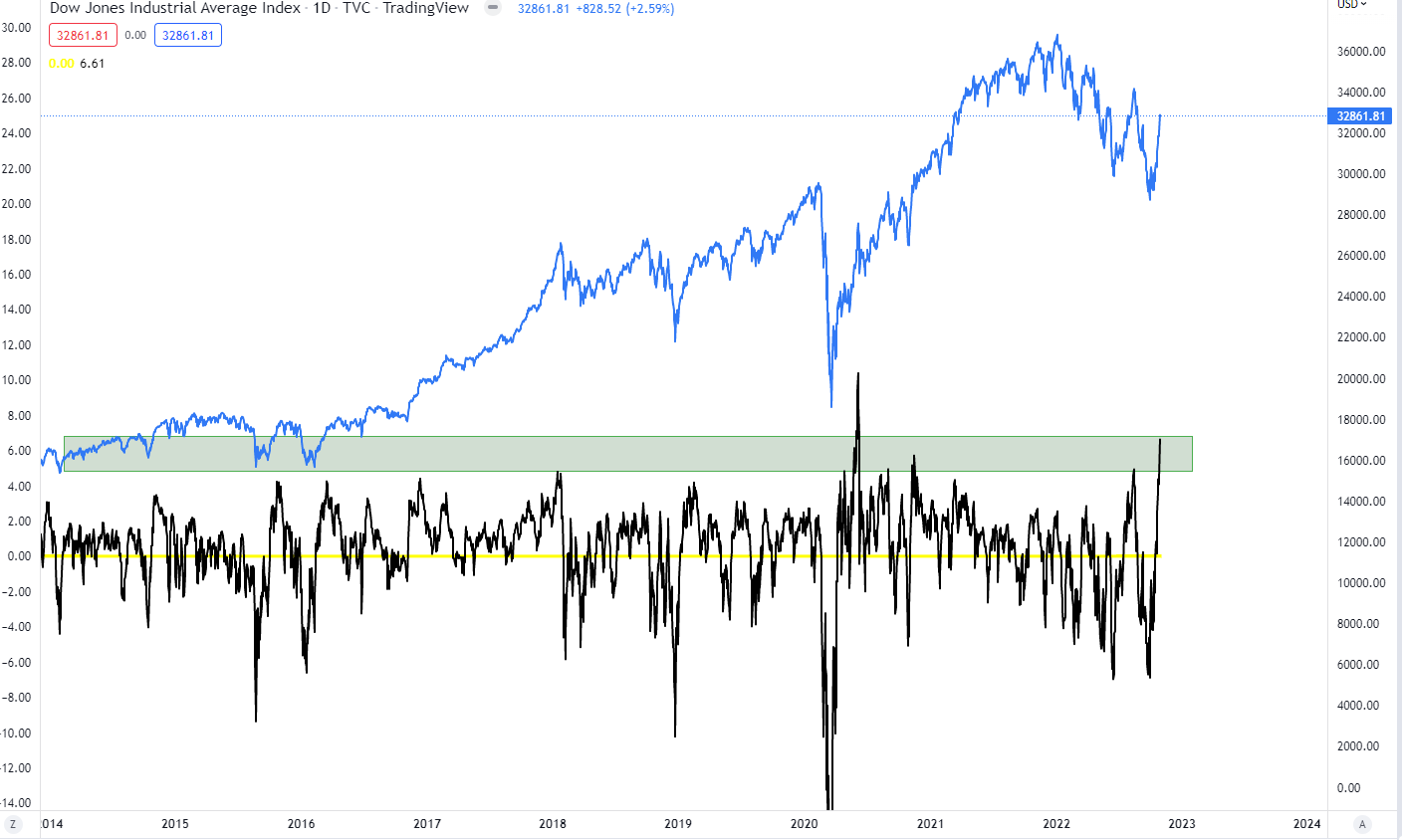 In the next several months, the market will decide between the “forces.” EPS will most likely continue to decelerate, as will EPS surprises and outlook revisions (PMI down). However, even if the Fed slows the pace of its rate hikes, real yields may fall, bolstering the bullish thesis. However, from the long-term perspective, it will be much more about stock-picking than a passive one. There are plenty of great and cheap companies on the market, and we would like to start to analyze and cover them deeply.