The yearly rate of inflation in Turkey has reached its highest level in 24 years, sending the Lira to new historic lows.

The Turkish Lira has fallen to new historic lows recently, pushing the USD/TRY currency pair above 18.50 for the first time. The Lira remains in a steep downtrend, undermined by the inflation collapse in Turkey.

The yearly inflation rate in Turkey has risen to its highest level in 24 years, aggravating the country’s cost-of-living issue even as the opposition groups insist that actual statistics are worse than reported ones.

According to a press statement from the Turkish Statistical Institute on Nov. 3, the 12-month Consumer Price Index (CPI), which gauges inflation on an annual basis, reached 85.51 percent in October. In Turkey, inflation has increased for seventeen months running. It has increased from the previous month by 3.54%. The communication and educational industries saw the lowest rates of inflation, rising by over 30% each.

Despite the high figures, opposition lawmakers and many residents argue that the true inflation rate is far higher and dispute the integrity of the reported data.

Independent economists from the ENAG research institution in Turkey estimate that the 12-month CPI was 185.34% in October. The CPI is estimated to have increased by 7.18% for the month overall.

Falling rates when the resort of the world hikes them

Over the previous months, the president of Turkey has advocated for lower interest rates. As a result, the nation’s central bank cut interest rates to 10.5% in October, marking the third straight month of reductions. Erdogan has also stated that he intends to continue lowering interest rates until they reach single digits.

According to CNBC, Liam Peach, senior emerging markets economist at London-based Capital Economics, predicted that the president will continue to exert pressure on the Turkish central bank to adopt a “looser policy.”

“Although the CBRT [Central Bank of the Republic of Turkey] said it will deliver one more 150 basis-point interest rate cut at its meeting later this month, there is a risk of further easing beyond that, adding more downward pressure onto the lira,” he said.

It looks like the bullish trend in USD/TRY (downtrend for the Lira) will continue when bulls push the pair above 18.70 USD, likely targeting the 19 threshold quickly.

On the downside, the support could be at 18.50 USD, where the short-term uptrend is. 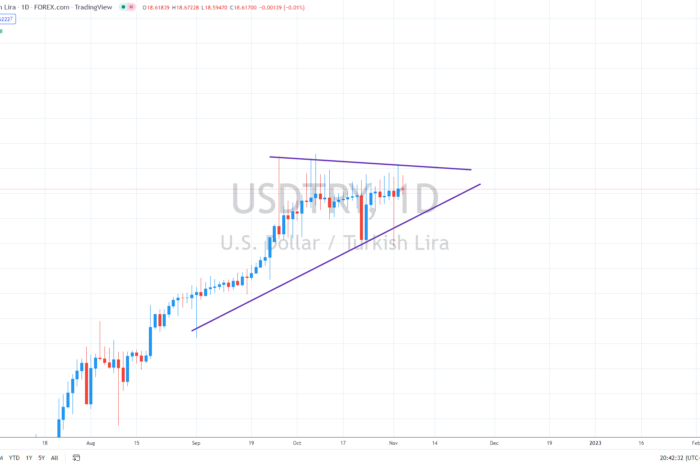