The USD has failed to benefit from today's US data, leaving the USD/JPY pair slightly lower during the US session.

The USD/JPY pair traded somewhat lower on Thursday, despite the overall USD strength today, falling toward the key support level of 145 before retracing most of the losses.

US GDP surprised to the upside

The US economy recovered rapidly in the third quarter amid a declining trade deficit. Still, the figures overestimated the country’s economic strength as domestic demand was at its lowest level in two years as a result of the Federal Reserve’s impulsive interest rate hikes.

After declining at a 0.6% pace in the second quarter, the gross domestic product rose at an annualized rate of 2.6% last quarter. The 2.4% rate of GDP growth was the average prediction of the economists surveyed by Reuters, with projections as low as 0.8% and as high as 3.7%.

Residential investment shrank for a sixth consecutive quarter, the longest such stretch since the collapse of the housing market in 2006, according to the Commerce Department’s advance third-quarter GDP report released on Thursday. This is because the sector is being crushed by skyrocketing mortgage rates.

You may also read: ECB follows Fed and lifts interest rates by 75bps

Even yet, the return to growth following two consecutive quarters of GDP reductions provided evidence that the economy was not in a recession. Still, the likelihood of one has increased as the Fed intensifies rate hikes to combat the fastest-rising inflation in 40 years.

Furthermore, analysts had anticipated a mild comeback in US durable goods orders after two straight months of decreases. This is exactly what happened, with durable goods orders climbing 0.4% monthly in preliminary September data (less than predicted +0.6%) after August’s data was revised up to a very slight increase.

The CapEx proxy, which feeds directly into GDP calculations, was likewise a considerable letdown, declining 0.5% monthly versus forecasts of a 0.5% MoM growth.

As previously mentioned, the 145 threshold is the critical barrier for the USD/JPY barrier. If the dollar drops below it, significant stop losses could be hit, likely sending the pair further lower and ending the long-term uptrend.

Alternatively, as long as the pair trades above that support, bulls could be more active, targeting the 148 level. However, the macroeconomic situation still favors USD over JPY, thus, dips should be bought. 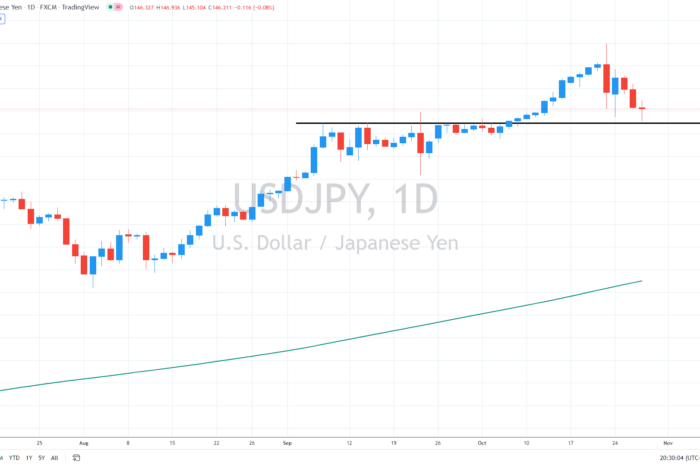