Monday has been a big one for the USD, as the US yields have continued to climb and the Bank of Japan undermined the JPY further.

The USD/JPY posted what appears to be the most significant rally since November 2020, as it traded nearly 2% stronger during the London session, before fading some of the gains.

Earlier today, in its continuous effort to defend the yield target at 0.25%, the Bank of Japan made the second offer to buy an unlimited amount of 10-year Japanese Government Bonds at 0.25%.

This comes after the first round of offers by the central bank failed to find any bids, prompting the 10-year Japanese yield to rally further toward 0.25%.

The Japanese yen plummetted following the news, pushing the USD/JPY pair 1.5% higher and touching the 125 level for the first time since August 2015.

You may also read: Rio De Janeiro as a Bitcoin hub?

Shortly after, Japan’s Chief Cabinet Secretary Hirokazu Matsuno said on Monday, the government is “monitoring the impact of weak yen on the Japanese economy closely with a sense of urgency.”

Following his remarks, the JPY has erased some of today’s losses, but it looks like the short-term trend will not change that soon.

US yields continued to increase sharply on Monday, pushing the 2-year yield 6% up, hitting the 2.4% threshold and the highest level since June 2019.

Traders are now pricing in a 50 bps rate hike at the Fed’s next meeting, while another 50 bps rate increase could follow afterward.

The US macro calendar will offer only February Trade Balance data and the Federal Reserve Bank of Dallas’ Texas Manufacturing Survey, likely not impacting the markets.

The technical situation remains positive, although the pair seems heavily overbought. Additionally, it is now hitting the critical resistance of multi-decade highs in the 125 area. Thus, traders might be compelled to take profits in this zone, considering the recent steep rally.

However, if the pair jumps decisively above the 125 level, large stop-losses could be hit, likely pushing the USD further higher toward the 2002 highs near 130. 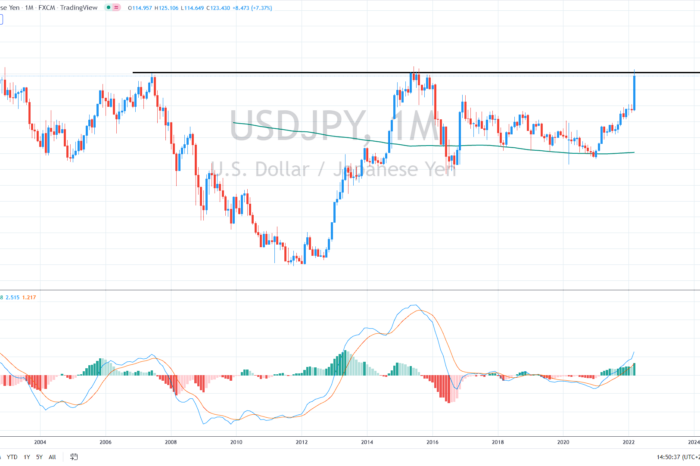