As the markets enter the last month of 2022 and prepare for the Federal Reserve’s final interest rate rise of the year, investors returning from Thanksgiving will confront a barrage of data reports in the next week.

Among the many highlights of a packed economic calendar in the coming days is the government’s monthly employment report, statistics on the housing market, a second look at GDP growth, PCE inflation, and a gauge on consumer confidence.

Rare, widespread demonstrations against tight coronavirus restrictions that had been implemented after COVID-19 infections reached a fifth daily record occurred over the weekend in China.

The nation’s zero-COVID policy has caused a surge of public disobedience nearly three years after the outbreak began, which is especially frustrating given that earlier last month, restrictions became less severe, giving rise to expectations of a full reopening.

Despite a dovish reading of the minutes from the FOMC meeting in November, another rate increase of 50 basis points is still anticipated from the US central bank in December. In contrast, the BoJ has not yet shown a desire to raise interest rates.

Additionally, BoJ Governor Haruhiko Kuroda reaffirmed that the central bank would continue its monetary easing in order to boost the economy and steadily hit its 2% inflation goal.

However, Friday’s data showed that the headline Consumer Price Index (CPI) in Tokyo increased to 3.8% from the consensus estimate of 3.6%. At the same time, the core CPI has increased to 2.5% from the expected 2.1%.

According to Bloomberg, Tokyo’s inflation has exceeded expectations to reach its strongest rate since 1982. This acceleration signals that after months of currency weakening and high energy prices, the statewide price increases will also accelerate in November.

Technically speaking, it looks like the USD/JPY pair will fall below its November lows, triggering stop losses and possibly leading to another wave lower. In that case, bears might target the 200-day moving average (the blue line) near 134.00. It would be the first test of the 200-DMA since February 2021, when the USD jumped above it and has rallied ever since.

You may also read: Forex outlook: EUR/USD, GBP/JPY and CAD/CHF

On the other hand, if the mentioned support holds, the greenback might jump toward today’s highs at around 139.50. 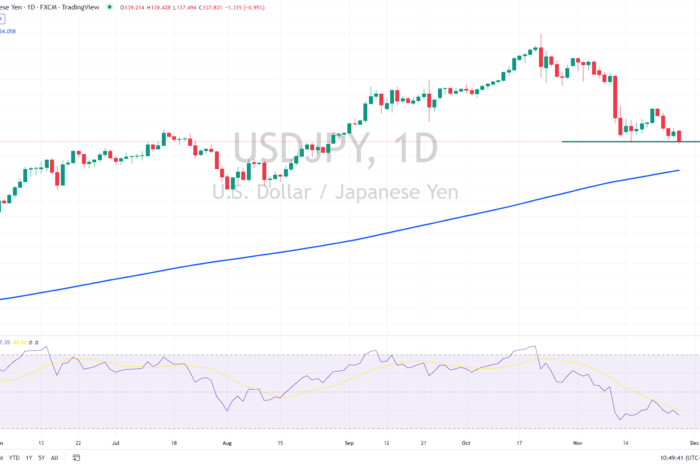