USD/JPY advances back above 140

The immediate outlook for the USD is not positive anymore as it faces some strong resistances.

The greenback swung back above the critical 140 threshold against the Yen. However, the immediate outlook seems negative as traders are pricing out Fed’s hawkishness.

The release on last Thursday of lower-than-anticipated US CPI inflation for October led to a sharp decline in the value of the dollar as investors became more confident that the Fed would decide to scale back its aggressive monetary tightening campaign earlier than previously anticipated, possibly raising rates by only 50 basis points in December.

Popular topic: FTX crash – here is a timeline of what really happened

Still, Christopher Waller, the governor of the Federal Reserve and a voting member of the rate-setting board this year, stated on Sunday that the markets should now focus on the “endpoint” of rate hikes rather than the speed at which they occur and that this point was presumably “a ways off.”

“We can now expect a period of elevated market sensitivity to Fed-speak, as investors will attempt to gauge which members have been convinced to press the breaks on tightening from the latest inflation figures,” analysts at ING said in a note.

However, the Fed pivot is not yet guaranteed, and risk assets continue to experience a number of negative factors, so it is likely too soon to expect a persistent dollar downturn.

Tuesday’s Asian session will see the announcement of Japan’s third quarter (Q3) Gross Domestic Product (GDP) numbers. Economic growth is anticipated to be 1.2% SAAR compared to 3.5% in Q2 and 0.3% quarter-over-quarter compared to 0.9% in Q2.

Furthermore, Haruhiko Kuroda, governor of the Bank of Japan (BoJ), stated on Monday that the unusually one-sided, rapid yen weakness “appears to have slowed, in part due to the government’s FX intervention.”

As long as the pair trades below 142, the short-term trend seems bearish, with rallies expected to be sold. The medium-term target for bears could be the 200-day moving average, currently near 133.

You may also read: Is COIN ready to accelerate amid all the crypto chaos?

On the upside, if the USD jumps back above 142, we might see a follow-up rally toward previous highs at 145. 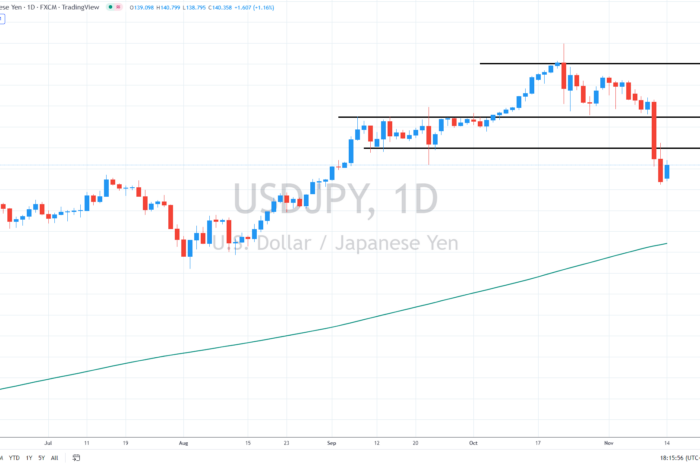