The Canadian dollar capitalized on rising inflation, advancing against its US rival.

Today, the Canadian dollar traded 1% stronger, pushing the USD/CAD pair to the 1.25 level amid broad US dollar weakness and Canadian solid inflation data.

The Canadian dollar strengthened following the data as traders think the Bank of Canada will be forced to tighten monetary policy faster since inflation is getting out of control.

You may also like: Netflix loses users and shares fall significantly

The Bank of Canada (BoC) is expected to raise rates by 75bp. Subsequently, the loonie is set to strengthen against the euro but weaken against the US dollar due to the stance of the European Central Bank (ECB) and the Federal Reserve (Fed), respectively, economists at Commerzbank report.

“On the market, more than 75bps of rate hikes are already priced in for the OIS-based rate expectations over the 3-month horizon – i.e., the next two BoC meetings. So whether the US central bank or the ECB is used as a benchmark, this seems rather disappointing or quite attractive.” analysts added.

The Danske Bank shares a similar view. According to analysts at Danske Bank, the greenback will rise versus the Canadian dollar in the coming months. They forecast USD/CAD at 1.30 in three months and 1.32 in six months, and 1.32 in twelve months.

“Bank of Canada continuing its tightening cycle will in isolation act as a supportive factor for CAD vs. most other currencies but not vs. the USD as we expect the Fed to deliver more tightening,” they said.

The USD/CAD pair has been stuck in a tight range over the previous week, with the key resistance in the 1.2640 zone, where previous lows are converged with the 200-day moving average.

On the downside, the multiple support pattern is converged with the psychological level of 1.25, where strong bids are expected.

Therefore, bulls might reappear near 1.25, trying to push the pair higher. The intraday resistance could be at 1.2550.

On the other hand, if the pair decisively breaks below the 1.2450-1.25 level, large stop-losses will be hit, likely sending the pair further higher. 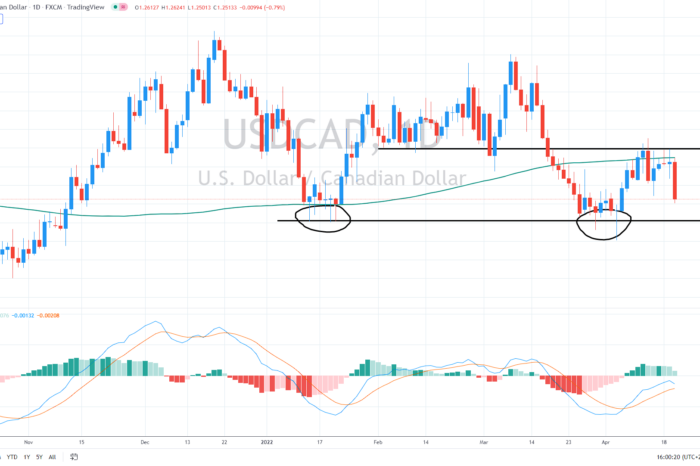