The anti-USD mood hit the markets on Friday, but the CAD failed to capitalize on it fully.

The Canadian dollar retreated from its daily highs, pushing the USD/CAD pair back above the psychological level of 1.30 as investors sold the CAD following disappointing labor market data.

Statistics Canada announced on Friday that the unemployment rate in Canada increased to 5.4% in August from 4.9% in July. Again, the result was worse than the 5% market expected.

Additional information about the report showed that, in contrast to the market forecast of 15,000, the Net Change in Employment was -39,700. In the same period, part-time employment climbed by 37,500 while full-time jobs decreased by 77,000.

The Participation Rate increased slightly from 64.7% in July to 64.8%.

“We doubt this number is the catalyst to instigate CAD weakness, but it may start to kick off the domino effect of bad news. That should keep the shelf life of CAD rallies short-lived.” economists at TD Securities reported after the release.

In other news, as per Reuters, Senior Deputy Governor of the Bank of Canada (BoC), Carolyn Rogers, the BoC repeated on Thursday that it continues to believe that a further increase in the policy rate is necessary.

“Recent data show inflationary pressures in Canada are increasingly broad-based. Getting inflation all the way back down to 2% will take some time; there could be bumps along the way,” he added.

On the other hand, the USD’s decline should be limited by the expectation that the Fed would tighten monetary policy quicker.

In fact, the implied probability of a 75 basis point Fed rate increase in September is currently at 85%. Thursday’s hawkish comments by Fed Chair Jerome Powell, reinforcing the central bank’s steadfast commitment to pushing inflation down, confirmed the bets.

The daily chart looks rather neutral as the pair has formed a clear double top pattern, with the resistance near 1.32. However, the 1.30 support could hold, considering today’s dismal Canadian jobs market data.

You may also like: EU STOXX jumps amid short-covering rally

Therefore, bears must push the pair below 1.30 to tag stop-losses of long positions in order to send the USD toward the 200-day moving average at 1.28. Alternatively, if the pair stays above 1.30, we might see a retest of the current cycle highs at 1.32. 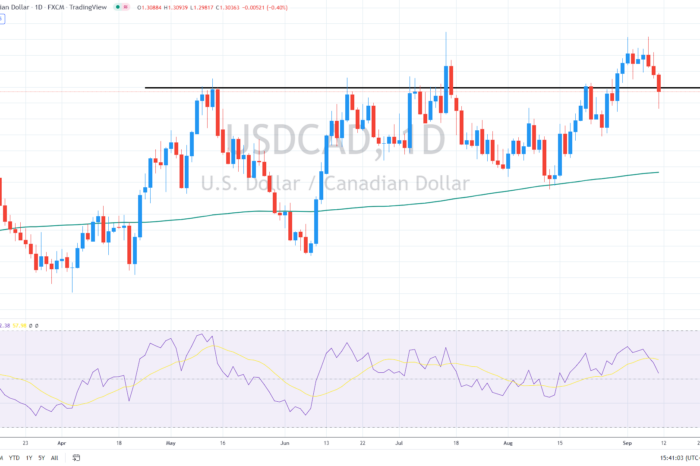