Could we see a reversal in the USD/CAD pair, or will bears prevail?

The USD/CAD pair was resting after this week’s rally as traders are waiting for today’s important macro data. At the time of writing, it was seen hovering near 1.26, unchanged on the day.

Later today, the Canadian labor market data for March are due, with the net change in employment expected to decline sharply from 336,000 to 80,000. The unemployment rate will likely improve slightly to 5.4%.

However, with the unemployment rate now below pre-COVID levels and likely to fall further to 5.3% in March, a shrinking pool of available workers could limit monthly job growth.

“With demand for workers likely still strong, especially over the summer as services activity bounces back, labor shortages could see further upward pressure on wages. Moreover, a further pick-up in wages ahead of the April BoC meeting and over the coming months could support an even faster removal of accommodation by the BoC.” analysts at Citibank said heading into the release.

You may also like: The UK plans to build eight new nuclear reactors

The market currently prices in a 50 bps rate hike at the Bank of Canada monetary policy meeting next week. However, the OIS-based rate expectations suggest that the market more or less completely prices in a large rate step already. Therefore, the market could focus more on the daily chart, which seems a bit bearish for the Canadian dollar.

Meanwhile, the WTI oil has dropped significantly and dived below the psychological level of 100 USD and also below the 50-day moving average. Nevertheless, the medium-term outlook for the commodity is still looking bullish.

Despite that decline, the oil price remains up 30% this year, driven by lower supplies and an uncertain level of demand following the most recent lockdowns in China.

Still, the short-term weakness might undermine the Canadian dollar, which is usually tightly correlated with the oil price.

Technically speaking, It looks like the USDCAD pair has posted a double bottom near 1.2450, a bullish reversal formation. After today’s data, we can see further upside, likely targeting the 200-day average at 1.2620 (the green line). If the USD/CAD pair jumps above that level, the short-term trend could change to bullish, with a possible rally to 1.28.

Alternatively, if today’s data will be bullish for the CAD, the intraday support could be found near 1.2530, before the current cycle lows in the 1.2450 area. 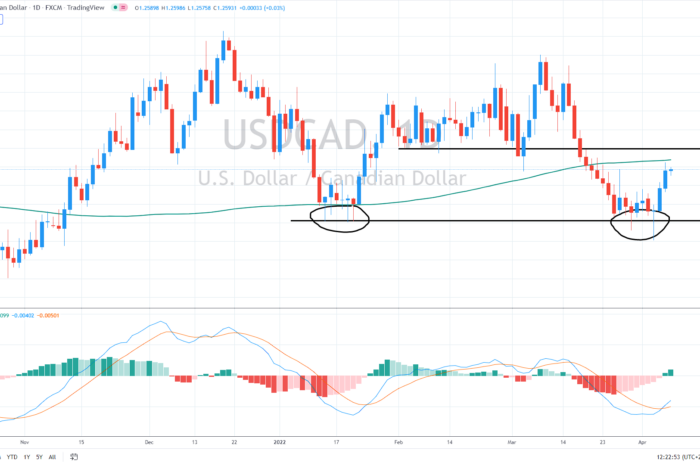