Tether beats Visa and Mastercard in transaction volume in 2022

While crypto bled hard in 2022, Tether recorded $18.2 trillion transaction volume, which is more than Visa or Mastercard.

Most people thought crypto is dead, or that it is going away, just because of one classical bear market which occurs after every market expansion. However, things couldn’t be farther from the truth.

According to a tweet posted on January 14th, the largest stablecoin according to its market cap Tether (USDT), processed $18.2 trillion in transactions in 2022. It even surpassed the volume of traditional payment networks like Visa and Mastercard.

Related article: Last year pushed Bitcoin miners on the edge – will 2023 be different?

When compared, the total value of transactions processed by Visa and Mastercard was $14.1 trillion, and $7.7 trillion, respectively. So, Tether was actually close to flipping the combined volume of Mastercard and Visa by $3.6 trillion.

Despite the crash of cryptocurrencies and even stablecoins in 2022, Tether has been experiencing enormous growth. Increased use of stablecoins is becoming the new norm as they represent a transparent version of fiat currencies, but mostly the US dollar at the moment.

Back in 2017, Tether had a multi-million dollar daily transaction volume. This grew in 2018 (and at the end of 2017) with the arrival of crypto winter. Tether was able to transact several billions of dollars daily in 2018 and this number exploded even more in 2022.

Tether usually processes tens of billions of dollars on a daily basis, which resulted in the aforementioned $18.2 trillion volume in 2022. Nevertheless, the company faces regular criticism over its reserves and solvency when the crypto market experiences unusually strong market crashes. This is nothing untypical in the test of time.

However, the current number of addresses using USDT is around 4 million, and this is only Tether. There are many more stablecoins in circulation, possibly reaching tens of millions of people.

The number of addresses that hold USDT, source: coinmarketcap.com

It is worth noting that the higher the transaction volume on a stablecoin, the more stable it becomes. Until 2021, Tether depegged many times during high market turbulence. However, its price stabilizes with more money in circulation.

For instance, USDT depegged to $0.973 during the Covid crash. This is almost a 3% price decline because of high volatility in the market. However, the biggest depeg that Tether experienced in the last year was just half a cent during the Terra Luna collapse. This is when USDT only fell to $0.995, while TerraClassicUSD (USTC) dropped over 99%. 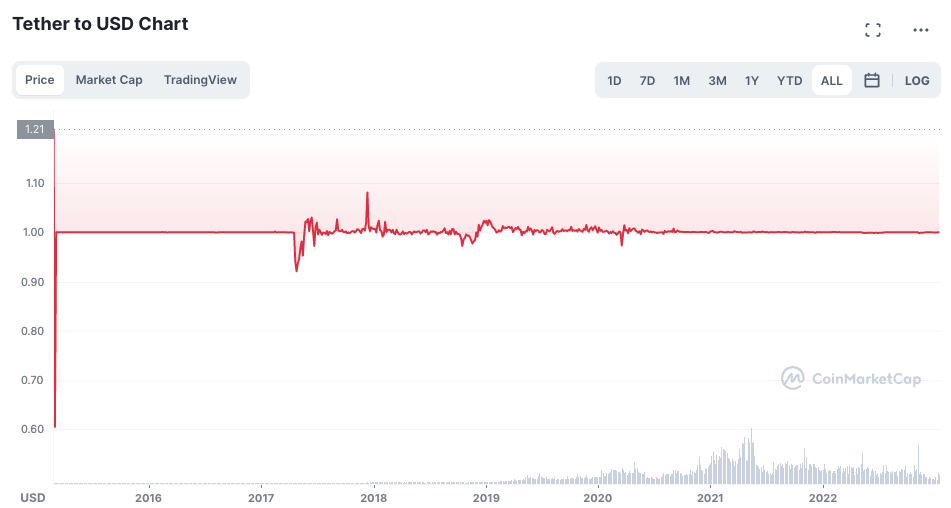 Yet, not all is good with Tether. Massive crypto withdrawals from exchanges after the FTX crash caused Tether’s market cap to decline from almost $84 billion to today’s $66.37 billion. USDT is still being criticized as it’s not being so transparent about its reserves. Check their reserves breakdown to see more info.