Tesla’s stock price declined 6% today and dropped below $170 for the first time since November 2020, indicating the bear market remains intact.

Tesla, a major manufacturer of electric vehicles, just had another significant recall, giving investors another chance to think about the implications of recalls at a time when software is just as crucial to automobiles as their physical components.

The National Highway Traffic Safety Administration, or NHTSA, has issued a recall for 321,628 Tesla vehicles due to a potential taillight failure and/or a faulty airbag deployment. The Tesla Model 3 and Model Y model years 2020 to 2023 are impacted by the decision.

Previously, TSLA reported that it had recalled almost 30,000 Model X vehicles in the US due to an issue with improper airbag deployment.

In specific low-speed collision situations where a young front-seat passenger ran the risk of being unbuckled and out of position, increasing the risk of injury, there was a chance that the airbag would not have been deployed correctly. On October 18, 2022, Tesla discovered the fault in the affected Model X units during a planned Conformity of Production test. By November 8, it had verified the findings.

Tesla attributed the delivery gap to logistical issues and automobiles in transit. However, that indicated a last-minute switch to exporting cars built in Shanghai before China’s demand declined.

In March and April, respectively, Tesla established its facilities close to Austin, Texas, and Berlin, Germany. For such sites, Model Y manufacturing is still sluggish but slowly increasing.

Although output in July and the beginning of August was hampered, recently completed renovations to the Tesla Shanghai site significantly increased manufacturing capacity.

You may also read: Stock indices may drop again soon – here’s why

However, Tesla China’s demand is difficult to match its rising output.

Technically speaking, the stock price dropped below the major support level of $183, confirming the bearish momentum. The next threshold to watch is at the 200-week moving average, near $160. We might see another leg lower if the price drops below that zone, targeting $140.

On the upside, the price must climb back above $183 to cancel the immediate bearish threat, with a possible relief rally toward $200 in that scenario. 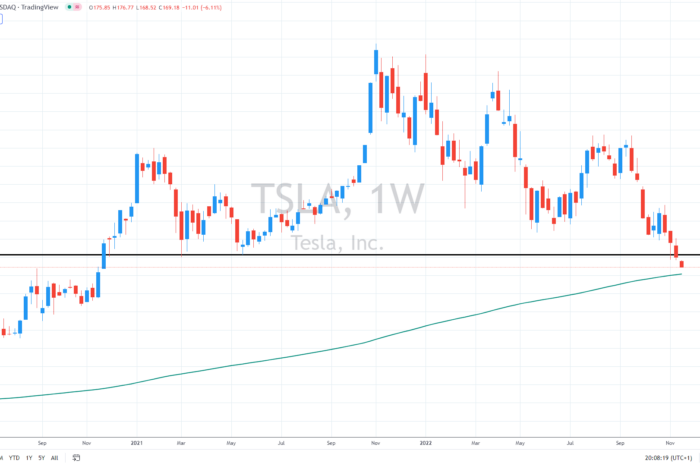