Can we expect a bear market rally in SP500? The index remains heavily oversold.

As global business and political leaders gather in Davos, Switzerland, for the annual World Economic Forum conference, which is being conducted in person for the first time since the epidemic began, US equities surged on Monday, attempting to rebound from last week’s losses.

At the time of writing, the SP500 index traded 1.5% higher, trying to jump above the important threshold of 4,000 USD.

Market sentiment shifted toward the positive, owing to the lack of additional unfavorable news during the weekend. As a result, equities rose, while the dollar fell and weakened significantly, driving commodities upward.

President Joe Biden has stated that he is exploring lowering tariffs on Chinese imports imposed by the previous administration. Last week, Treasury Secretary Janet Yellen said she was pressing the Biden administration to eliminate tariffs that she said caused “greater harm to consumers and businesses” in the United States.

The prospect of some tariff relief while the US economy struggles with decades-high inflation boosted risk assets, which had been hammered in recent weeks by fears about price increases, more aggressive Federal Reserve monetary policies, and foreign concerns over Ukraine and China. The SP500 was down seven weeks in a row as of Friday, its worst losing streak since 2001. The index dropped as much as 20.6% from its January record high on Friday, putting it in the bear market territory.

“SP500 has resultantly formed a bullish ‘hammer’ candlestick reversal and with a short-term bullish momentum divergence now in place, and with US Bond Yields and the USD stabilizing, all this reasserts the potential for a short-term phase of consolidation.” analysts at Credit Suisse said on Monday.

Technically speaking, the index appears heavily oversold, likely prompting a short squeeze rally in the following days. However, unless there are any fundamental changes to the global outlook, it would be considered a bear market rally only.

The key short-term resistance could be in the 4,000 – 4,040 USD zone. A move above that might prompt further buying volume, likely targeting the 4,100 USD. The MACD indicator is also about to send a bullish signal, confirming the mentioned rally.

On the other hand, a failure to reclaim 4,000 USD could cause frustration among bulls, with a possible decline to the current lows at 3,800 USD. 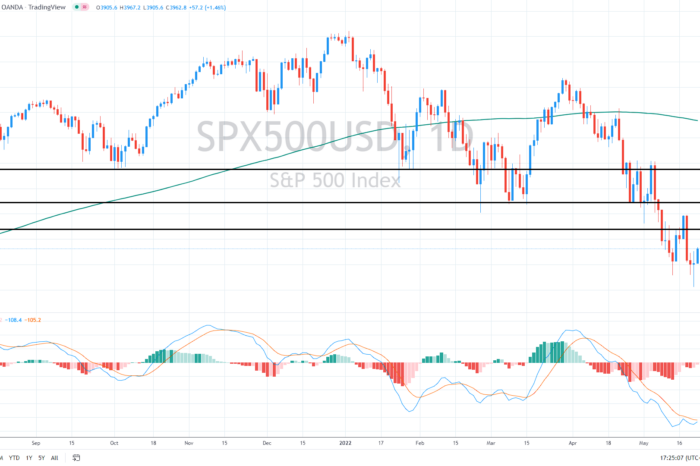