The FTSE 100 index struggles to stay in the 7,600GBP region, likely leading to another leg lower over the following days.

Equity indices worldwide continue to suffer amid soaring yields reacting to the unstoppable rise in inflation globally. On Tuesday, the FTSE 100 index was down for the fourth day, dropping toward 7,400 GBP and potentially testing the 200-day average at 7,300 GBP later in the week.

The Office for National Statistics stated that over 90% of British adults reported a cost-of-living increase in the previous month.

As per the latest Opinions and Lifestyle Survey from the ONS, 87 % indicated their living costs increased between 16 and 27 March compared to the previous month, up from 62 percent in November 2021.

Nearly a quarter said it was “extremely tough or difficult” to pay their regular household payments compared to a year earlier, while 43% of those who pay power bills said it was difficult to pay them.

Consequently, 17% of respondents said they had borrowed more money in the last year, whereas more than half (54%) said they were spending less on non-essential products and services.

You may also read: SP500 falls toward March lows

According to the Rightmove website, average UK property asking prices reached a new high in the first quarter of 2022.

The average requesting price increased by 19,082 GBP to 360,101 GBP, with 53 percent of houses selling at or above their final posted asking price, according to Rightmove.

Over the last three years, the average time to relocate properties has decreased by half, from 67 days to 33 days.

“With three new monthly price records in a row, 2022 has started with price rise momentum even greater than during the stamp duty holiday-fuelled market,” said Tim Bannister, Rightmove’s director of property data.

Elsewhere, Chancellor of the United Kingdom Rishi Sunak said Tuesday that the British government is sticking to fiscal guidelines despite global economic challenges.

“We must manage public finances sustainably to avoid saddling future generations with further debt. The UK is showing commitment to sustainable public finances while supporting long-term growth and addressing the cost of living pressures.”

It looks like a triple/multiple top pattern on the daily chart, with the resistance near 7,650 GBP, which is a bearish reversal formation. Thus, as long as the index trades below 7,600 GBP, the medium-term outlook seems neutral-to-bearish.

The intraday support should be at 7,400 GBP, and if not held, we might see a retest of yesterday’s lows at 7,350 GBP, with eyes set on the 200-day average slightly below 7,300 GBP. The MACD indicator has also sent a bearish signal recently.

Alternatively, if the Footsie climbs above 7,500 GBP, the short-term trend could change to bullish. 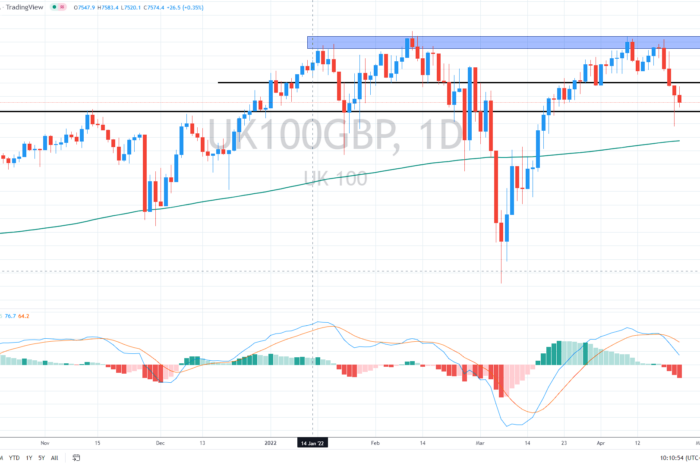