Spotify shares gained nearly 6% after its investor day. The rise was mainly due to news regarding the podcast.

Investors got some hope back

The company revealed that it made roughly $215 million from podcasts last year. This was the main reason why investors put their confidence back into the company and the stock rose nearly 6%. However, the company’s stock has fallen more than 50% since the beginning of the year, significantly more than the S&P 500 communication services sector index.

Spotify has invested $1 billion in this direction before, and now, based on the numbers, it looks like the investment is starting to pay off. Director of Content and Advertising Dawn Ostroff talked about the case for continually improving monetization. So the whole podcast business, in their words, could be a $20 billion opportunity.

Read also: Under Armour will be removed from the S&P 500 index

When we talk about monetization and podcasts, we have to mention the fact that the company expects margins between 40 and 50%. For audiobooks, they are also expecting margins of around 40%.

Unlike the big drops in the stock since the beginning of the year, the company has been doing well in other things. Despite the current challenging global situation, the company has seen an increase in users and paying subscribers, and currently, 422 million users a month use Spotify. Which is 66 million more than the company had in the first quarter of last year. 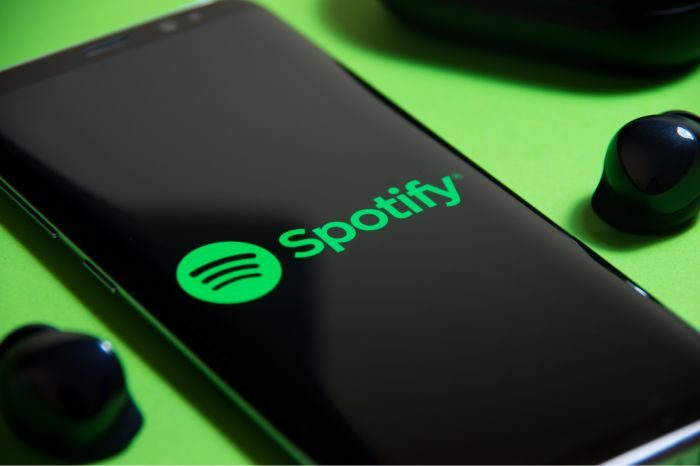 Spotify app on the smartphone

The entire podcast market is growing

Podcast advertising revenue in the US surpassed the $1 billion mark for the first time last year. This figure is now expected to grow significantly year on year. Revenues are expected to surpass $2 billion in 2022 and even $4 billion by 2024.

Spotify also appears to have the advantage that its biggest market is not the US, where there is more competition from platforms such as Apple Music, Amazon Music, and YouTube Music, for which the US is the primary market of interest.

On an annual basis, Spotify has its largest presence in Europe. North America is second, followed by Latin America and the rest of the world. Spotify, thus, is well-positioned to continue to be the No. 1 streaming service not only in the U.S. but worldwide.