It looks like we might see a strong rally as the index has posted a large bottoming pattern.

As of Thursday’s closing, the SP500 index was on track for a 4% weekly increase, which, if sustained, would be the biggest weekly gain since mid-March. Conversely, the SP500 has been falling for seven weeks in a row, its worst losing stretch since 2000. The Dow and Nasdaq futures both rose on Friday.

Separate statistics on personal income and expenditures are likely to reveal continued healthy wage growth and consumption patterns across the US economy.

Last but not least, the University of Michigan’s Consumer Sentiment Index for May is on schedule, expected to stay at 59.1.

You may also like: Broadcom makes one of the largest acquisitions

The takeaway from the minutes of the latest Federal Reserve meeting, which indicated that the central bank might reduce its tightening if it sees signs of inflation trending downward, has contributed to the brighter tone in the markets this week.

Elsewhere, Secretary of State Antony Blinken stated on Thursday that the US would not stop China from building its economy as long as it followed international standards, which some investors saw as a positive sign for bilateral ties.

It looks like a massive rounding bottom pattern on the four-hour chart, which usually marks the final low in the trend. The index is now facing a significant resistance near 4,095 USD, and if bulls push the price above it, we might see a relief rally toward 4,300 USD.

Alternatively, the support is expected at the psychological level of 4,000 USD, and as long as the index trades above it, the short-term outlook seems bullish. 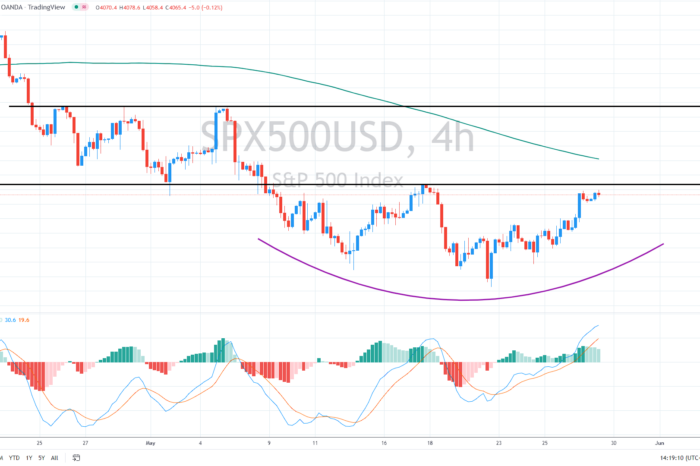