The S&P 500 index declined 2% on Friday, erasing 50% of yesterday’s massive CPI jump as it again fell below the 3,600 USD threshold. Volatility continues to be exceptionally high, but the VIX index jumped only 1% today, suggesting the short-term bearish trend might not last long.

The University of Michigan rattles markets

In the preliminary October data, the University of Michigan headline confidence was anticipated to increase only marginally, and it did so, above expectations with a 59.8 print as opposed to 58.8 forecasts. But this was caused by an improvement in the present circumstances countering a decline in the expectations for the future.

Read more: Inflation breakdown – Not as bad as it seems

Consumers may expect a rough ride ahead due to the ongoing uncertainty about the future course of prices, economies, and financial markets worldwide.

However, inflation expectations, which surprisingly increased, were what most investors kept an eye on.

Across all age groups, income levels, and levels of education, rises in the median predicted year-ahead inflation rate of 5.1% was seen. For the first time since July 2021, long-term inflation expectations dropped below the 2.9-3.1% range last month, but since then, they have risen to 2.9%.

Before the opening bell on Friday, JPMorgan Chase began reporting earnings. After the bank’s quarterly reports beat Wall Street expectations for earnings and sales, its stock price increased by 2%.

Wells Fargo reported third-quarter revenue that was higher than anticipated, offsetting a profit shortfall. As a result, shares increased by 3%. Moreover, Morgan Stanley’s third-quarter earnings decline brought its shares lower by 5% in noon trade. Lastly, Citigroup announced a 25% decline in third-quarter profit due to a subpar investment banking business.

Technically speaking, after reaching 3490 and completing the 50% retracement of the rise from 2020 to 2022, the S&P 500 staged a dramatic recovery. However, it is essential to note that despite numerous breaches below June lows, bearish momentum has been unable to recover.

You may also read: $3,500 per Bitcoin as the worst case scenario? Not so fast

“A short-term bounce can’t be ruled out; it would be interesting to see if the index can form a base and reclaim its recent high near 3810/3840. However, this must be overcome for affirming a meaningful up move.” analysts at Société Générale think. 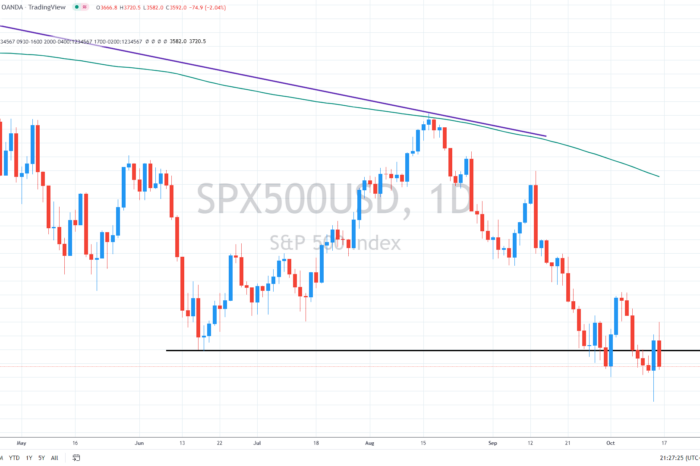