Stock indices across the globe are getting ready for this evening’s Fed decision. So far on Wednesday, volatility has been minimal.

Stock indices across the globe are getting ready for this evening’s Fed decision. So far on Wednesday, volatility has been minimal across the markets, with the SP500 index trading briefly higher on the day, hovering around 4,185 USD during the London session.

Market players have been anticipating this hefty rate rise for weeks, especially after comments from top Federal Reserve officials appeared to encourage such a move. Powell stated in April at a public speech with the International Monetary Fund that he believes it is “appropriate… to be moving a bit more swiftly” on raising rates and that a rate hike of 50 basis points is “on the table” for May.

At its May meeting, the Fed is also likely to announce the start of quantitative tightening or the removal of assets from the central bank’s 9 trillion USD balance sheet.

You may also like: AUD/USD stays stronger following a rate hike

The prospect of increased interest rates has sparked volatility in equities markets, which had become used to ultra-low interest rates and essentially loose monetary policies during the previous two years. At the same time, many analysts believe the Fed extended its pandemic-era support programs for too long, causing inflation to reach its highest levels since the 1980s.

And, after the US economy contracted in the first quarter of the year, the question of whether the Fed would be able to tighten policy without tipping the economy into a prolonged slump remains unanswered.

Apart from that, traders will also pay attention to the ADP employment report, expected to decline slightly to 395,000 in April, down from 455,000 in March. Moreover, the services ISM survey is due, with investors anticipating a minor improvement from 58.3 to 58.5.

The recent decline has stopped near 4,150 USD, which seems to be significant support for now. Additionally, Monday’s candle looks like a bullish pinbar, likely offering some support for bulls. At the same time, the index is heavily oversold. Thus, if today’s Fed decision is not as hawkish as feared, we might see a considerable short-squeeze rally, targeting 4,275 USD in the initial reaction.

On the other hand, if today’s reaction is bearish, the SP500 index could decline back to one-year lows above 4,040 USD. 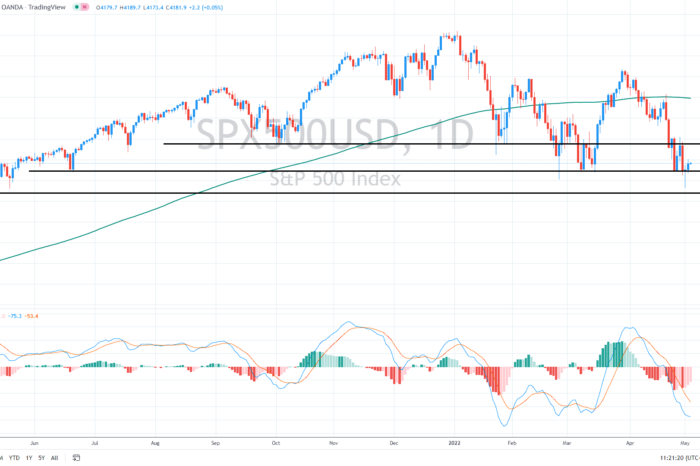