Additionally, it seems that the financial markets got ahead of themselves in pricing in a dovish Fed, as the FOMC governors continued in their hawkish rhetoric today.

John Williams, president of the New York Fed, stated on Monday that while he sees indicators that inflation is beginning to decline, there is still work to be done before the Fed can achieve its target of 2% inflation.

“Overall demand for labor and services still far exceeds available supply, resulting in broad-based inflation, which will take longer to bring back down,” Williams said in a speech Monday at the Economic Club of New York.

Williams emphasized that there is “still more work to do” as the Fed keeps up its campaign of raising interest rates to rein in price inflation. In the next years, Williams continued, “further tightening of monetary policy should ultimately restore the balance between demand and supply and bring inflation back to 2%.”

Furthermore, Jim Bullard of the St. Louis Fed said that financial markets are underestimating the likelihood that authorities would need to be more active in raising interest rates next year in order to defuse inflation.

“There is still a heavy degree” of expectations that inflation will go away naturally, Bullard said Monday in a webcast interview with MarketWatch and Barron’s.

Bullard reaffirmed on Monday that in order to achieve policymakers’ aim of being sufficiently restrictive to suppress inflation close to a four-decade high, the Fed must, at the very least, approach the bottom of the 5% to 7% range.

The Fed “has a ways to go to get to” restrictive rates, adding that markets are underestimating the risk that the FOMC will be more aggressive and will have to go higher on rates in 2023.

However, Bullard will become a non-voting member of the Fed next year, therefore, his “hawkishness” could go unnoticed.

The lack of profits growth across firms would likely cause the S&P 500 to conclude next year about flat, according to Goldman Sachs analysts led by David Kostin in their 2023 forecast.

It looks like the 200-day moving average (the blue line) will be a major resistance again. If the price jumps above it, the 2022 bear market could be over.

You may also read: These are the most brutal FTX acts recently uncovered

In that case, the next target for bulls could be at August highs near $4,320. Alternatively, if the bearish trend persists, the index could decline to $3,900 in the next days. 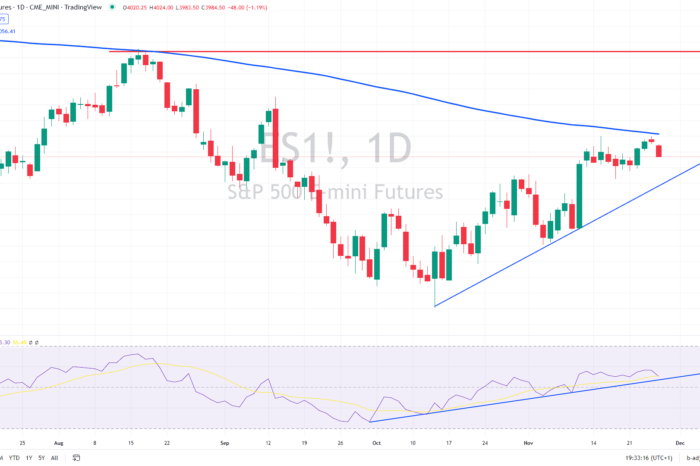