A short-term corrective rally could occur in the markets, but the fundamental situation favors selling any rallies in stocks.

The S&P 500 index traded nearly 1% higher on Tuesday and so far has defended the psychological 4,000 USD support.

As the Fed continues to tighten policy, the rate of tightening is anticipated to slow down. Still, Fed Chair Powell highlighted that reestablishing price stability will need a restrictive policy for some time.

Another crucial lesson was the need for central banks to persist until the task was completed. Market expectations for a dovish Fed turn in the next year are further opposed by the necessity to maintain a tighter policy for the foreseeable future. Rate cuts from the Fed as soon as next year have become less probable, according to the US rate market.

“With rates likely to stay higher for longer, our base case is for further volatility, earnings downgrades, and higher-than-expected default rates over the course of the next year. Thus, our price target for the S&P 500 in June 2023 is 4,200, versus 4,057 as of Friday’s close,” economists at UBS maintain their view.

At the Fed’s September meeting, there is a 72.5% likelihood that interest rates would increase by 75 basis points, which would represent the third consecutive increase of that size. Moreover, money markets predict that the Fed funds rate will be about 3.7% by year’s end.

While the carefully watched yield curve, which is determined by the difference between the two and 10-year rates, stayed firmly inverted, the two-year Treasury yield, which is particularly sensitive to interest rate forecasts, momentarily approached a 15-year high at 3.5%.

Additionally, according to Refinitiv Lipper data, which was quoted by The Wall Street Journal, US stock funds saw a net outflow of $1.2 billion in the week ending August 24.

You can also read: Honda to build $4.4 billion battery factory in the US

Additionally, seasonal conditions don’t favor stocks. The S&P 500 has typically had its poorest months in August and September. Over the previous 25 years, the index has decreased by an average of 0.6% and 0.7% for those months, respectively, according to Bloomberg.

Market players will be eagerly monitoring the Consumer Confidence Index and JOLTS Job Openings data from the US later today.

The index remains capped by the long-term bearish trend line, which is currently converged with the 200-day moving average near 4,300 USD. If the index jumps above that level, the uptrend could resume.

However, so far, the outlook seems negative as stocks remain undermined fundamentally. The next target for bears will likely be at 4,000 USD and then at 3,900 USD. 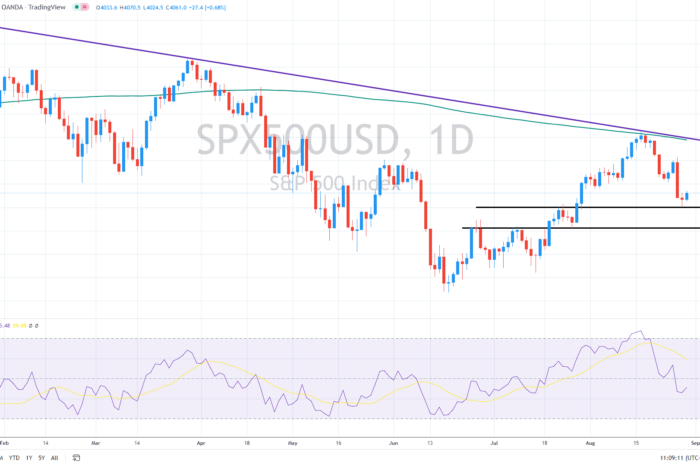