Seagate continues to underperform, down 50% YTD

The company has suffered from a series of earnings misses and has seen its share price trending downward.

STX is up against the fierce competition in a changing market. It is now more difficult for Seagate to gain market share in the crucial SSD sector as a result of the combination between Western Digital and SanDisk. Short-term revenue pressure is projected to come from persistent global macroeconomic headwinds, rising inflation, and continuing component shortages.

Additionally, a sizable amount of Seagate’s income comes from sources outside the United States, making the business vulnerable to fluctuations in exchange rates. Unfavorable changes in exchange rates can have a negative effect on outcomes and limit economic potential.

Over the previous year, STX has consistently underperformed the market. Since its peak in December of last year, the price of this unfavorable stock has been trending downward, being down 50% year-to-date. A stock is telling us, “I’m really weak,” when it can’t even produce a rise while the market as a whole is rising.

Over the past year, STX has suffered from earnings misses. Three out of the previous four quarters saw the data storage provider miss expectations. The most recent fiscal Q1 earnings from STX were $0.48 per share, below the $0.68 average forecast by -29.41% last month. $2.03 billion in revenues also fell short by -1.95%.

Over the last four quarters, STX has reported an average earnings shortfall of -11.59%. Underperformance in the stock price is a certain way to ensure that profit projections are consistently missed by such a large margin.

Recently, analysts have begun reducing their earnings projections. According to Zach’s equity research, over the previous 30 days, projections for the current quarter have been reduced by -74.8%.

A very nice bearish pattern has been formed in the daily chart. The critical resistance now stands near $57.60, which looks like a triple/multiple top pattern. That could be a bearish reversal formation.

The next level of support could be expected at $50, followed by the current cycle lows near $48 USD.

On the upside, should the stock price jump above $57.60, the medium-term trend could change to bullish, likely targeting $60 and triggering some large stop-losses of short positions. 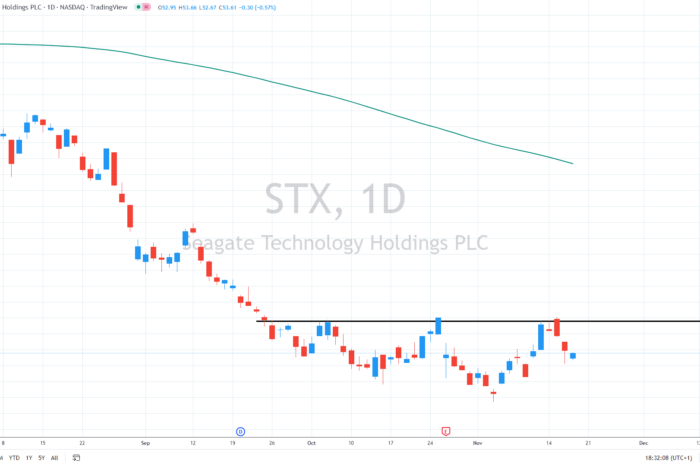