The Salesforce (CRM) stock price cratered circa 10% as investors ignored rather optimistic earnings and focused on management issues in the company.

Salesforce’s earnings were fairly impressive, with sales rising 14% year over year to $7.84 billion (instead of $7.83 billion as management had anticipated). Revenue growth of 8% to 10% year over year is predicted for the fourth quarter, which isn’t too awful given that many companies are deferring tech purchases in light of the impending significant economic recession in 2023.

It is also noteworthy that Salesforce is achieving these growth rates despite the historic run-up of the US dollar versus other currencies, a result of the Federal Reserve’s aggressive course of interest rate rises in an effort to contain inflation.

Total revenue would have climbed by 19% in Q3 if currency exchange rates were not taken into account. Additionally, Q4 sales growth is anticipated to increase by between 11% and 13%, excluding any additional effects of the US currency.

For the entire fiscal year 2023, the operational profit margin and adjusted operating profit margin are now anticipated to be 3.8% and 20.7%, respectively (the 12 months that will end in January 2023). Salesforce had previously said that an operating margin of 3.6%, or 20.4% on an adjusted basis, was to be anticipated.

Salesforce also unveiled its first-ever share repurchase program at its Q2 results announcement, which is a means for tech businesses to distribute extra cash to shareholders. In the third quarter, Salesforce bought back $1.7 billion worth of shares.

Taylor was chosen by Benioff to succeed Keith Block, an Oracle executive who resigned from his position just before the epidemic started, as co-CEO in 2021.

Taylor was an integral part of the $27.7 billion purchase of Slack Technologies by Salesforce, a firm that develops software that helps organizations manage customer interactions successfully.

The unexpected resignation, according to Jefferies analysts, showed that the “co-CEO arrangement is not working with two exits in three years.”

At least 17 brokerages decreased their price estimates for the company, with J.P. Morgan analysts making the biggest reduction by dropping their estimate by $45 to $200.

You may also like: How have Lionel Messi and Argentina affected crypto markets?

The last major support for the stock price seems to be at previous cycle lows near $138. If the price drops below that level, significant stop losses should be triggered, likely sending the price below the $130 threshold.

On the upside, the resistance seems to be at around $165, strengthened by the 200-day moving average near $173. 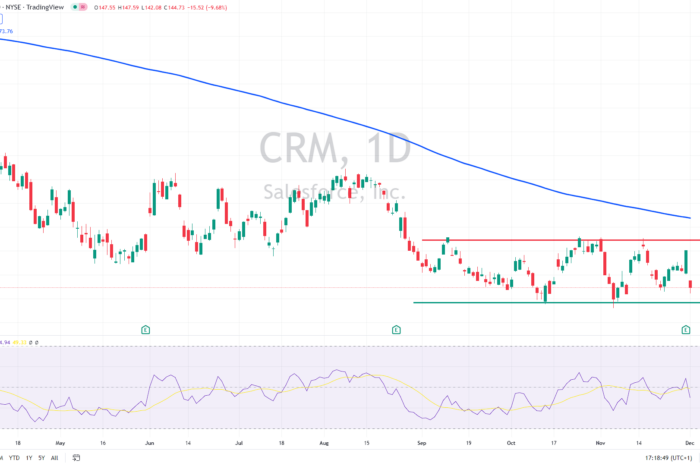