This article discusses the issues facing Papa John's Pizza, and whether investors should avoid the stock.

Third-largest pizza delivery service in the world, Papa John’s has more than 5,500 locations in around 50 nations and territories. Papa John’s faces off against Domino’s Pizza, other regional chains, and more upscale eateries in the take-out pizza industry.

The rise in stay-at-home consumers over the past five years, together with consumers’ desire to dine out during an era of economic expansion and enthusiasm, were favorable factors for Papa John’s and other businesses.

Over the past 60 days, the pizza maker’s FY22 and FY23 consensus projections have decreased 6% and 7.5%, respectively, and a little bit more if we look back a little further. According to Zack Equity Research forecasts, PZZA’s sales would increase by 2% in 2022 before shooting up by almost 5% in FY23. These projections reflect sales growth of 14% in FY19 and 12% in FY20.

As per projections, Papa John’s adjusted earnings would decline by 15% in 2022 to $2.99 per share before rising back to slightly less than their FY21 total the following year.

Even if the industry as a whole only fell by 14% in 2022, Papa John’s share price fell by nearly 40%. With Papa John’s already down 9% over the previous two years and DPZ down 22%, PZZA’s 2022 decline will likely be similar to that of its competitor Domino’s.

Wall Street is concerned about the likelihood of pizza delivery weariness and the ongoing difficulties faced by many other eateries who have found success with food delivery services like Uber Eats. Due to sluggish consumer spending, increasing inflation, and expanding non-pizza competition in the at-home delivery market, investors may wish to avoid Papa John’s shares at this time.

It looks like the price could soon return above previous lows near 75 USD, likely implying further upside potential. The previous break to new lows seems to be a false one, usually a bullish reversal formation.

The next target for bulls could be at 78 USD and possibly the 80 USD level.

Alternatively, if bears reappear, they could send the stock price back to the current cycle lows near 70 USD. 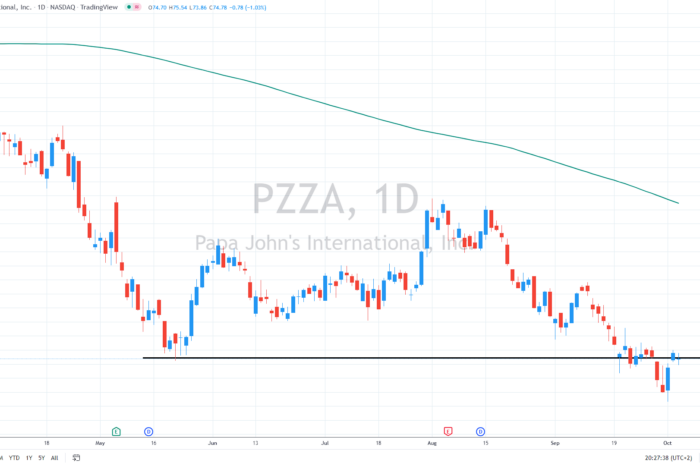