Wednesday's risk-on sentiment helped to push the two-year yield to new highs as traders continue to price in soaring inflation.

Investors continued to sell US bonds amid inflation fears, pushing the 2-year yield to new cycle highs above 1.65%.

Inflation in the US is expected to increase further to 7.9% year on year, with the core gauge seen rising to 6.4% yearly. The Fed has already confirmed it is ready to raise rates in March.

However, judging from the recent price action in several essential commodities, such as oil, wheat, copper, nickel, and so on, the CPI benchmark could jump into double digits soon.

Therefore, the US central bank will need to deliver several more rate hikes to counter the soaring inflation.

Strategists at TS Securities expect the Fed to hike rates by 25 bps at every meeting until November.

“We look for the Fed to start the hiking cycle in March with a 25bp rate hike and deliver six consecutive hikes in 2022. As a result, we forecast the Fed funds rate to end the year at 1.5-1.75%. After a pause at year-end and early 2023, we see the Fed raising rates three more times to reach a terminal rate of 2.25-2.50%.” strategists said in a note.

They also forecast higher bond yields for this year – their target is at 2.5% for the 10-year yield by year-end.

Technically speaking, the two-year yield trades above its 200-week moving average, confirming the long-term uptrend. However, bond investors have somewhat ignored the recent volatility due to the ongoing war in Ukraine as they kept focusing on inflation problems.

The next target for the yield could be at 1.7%, and if that level does not hold, we might see a quick rally toward the psychological level of 2.0%.

On the other hand, should the situation in Ukraine worsen, investors might start buying the safe-haven US bonds. In that case, the support for the yield is seen at 1.5%, followed by the last week’s lows near 1.28% and the 200-week moving average at 1.2%. 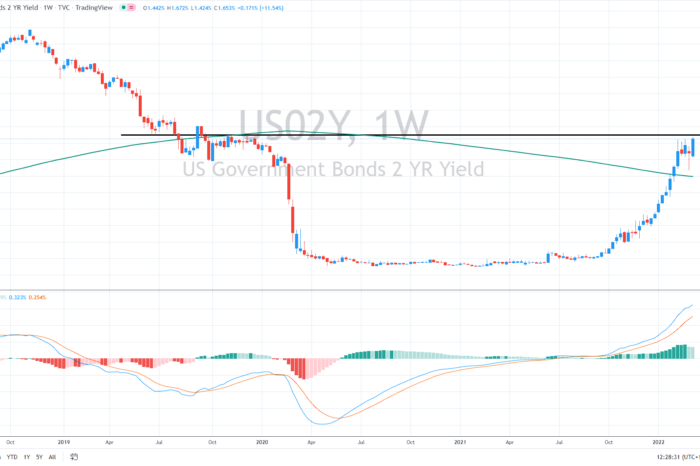