Oil prices are back to levels seen in January

Monday saw a near-record low for this year for oil prices. Uncertainty over the forecast for fuel demand was sparked by street demonstrations against strict COVID-19 regulations in China. Since China is the largest petroleum importer in the world, this uncertainty remains a big market mover.

The markets were erratic ahead of this weekend’s OPEC+ meeting and the impending G7 price restriction on Russian oil. The zero-COVID policy of President Xi Jinping has been maintained in China despite the majority of the globe having removed most restrictions.

You may also like: Chevron receives permit for oil production in Venezuela

On Sunday night, hundreds of protesters and police battled in Shanghai. Demonstrations over the restrictions erupted for a third day and extended to several cities. On December 4th, the Organization of the Petroleum Exporting Countries (OPEC) and its allies, which includes Russia, will meet again. OPEC+ decided to cut its daily output target by 2 million barrels in October.

Diplomats from the Group of Seven (G7) and the European Union have been debating a price ceiling on Russian oil. So far, the forecast is between $65 and $70 per barrel. This is an effort to limit the amount of money used to support Moscow’s military incursion in Ukraine while avoiding any disruptions to the world’s oil markets.

There was disagreement among EU states over how high to set a cap on Russian oil prices, which could have had a limited effect. Setting the cap too low would mean no effect in Russia, since the price is already below the cap.

WTI continued its last sessions’ downward crash. The trend remains bearish with new one-year lows. The following support could be found at the lower trendline of the bearish channel, currently slightly above $73. If it holds, bulls could push the price towards last week’s $79, or potentially hitting the psychological level of $80, where the upper trend line of the bearish channel is also located.

More like this: DAX struggles after a massive rally

In case the bears keep selling, oil prices will not hold the support of $74.4. The price could be falling to as low as $65, a price seen last December. Since the price has been declining sharply, the market could be oversold, implying a possible short-term correction higher. 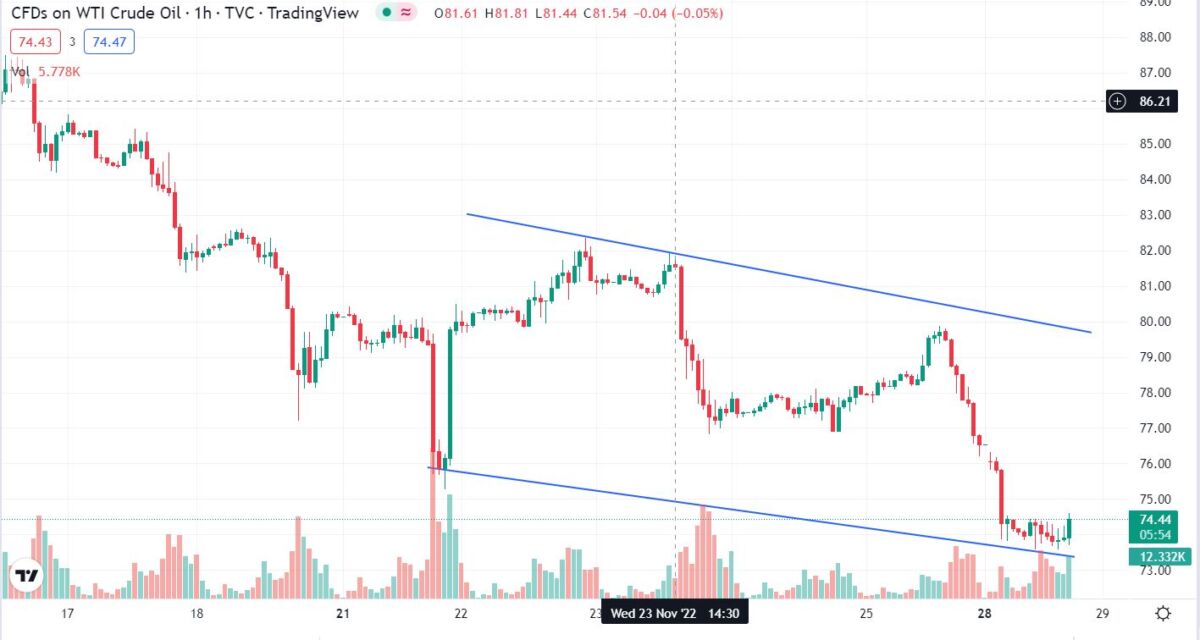