Traders sold the Kiwi as sentiment deteriorated again on Wednesday, boosting demand for the greenback.

The Reserve Bank of New Zealand (RBNZ) increased its Official Cash Rate (OCR) by 50 basis points (bps) sequentially for the fifth time, which resulted in strong bids for the NZD/USD pair, reaching an intraday high of 0.5769. However, the rally fizzled quickly, sending the Kiwi into negative territory during the EU session.

The size of the rate increase was consistent with what institutional investors had predicted, dampening any “pivot hopes”. Due to this, the OCR is now 3.5%.

For the second quarter of 2022, price pressures in the NZ economy were estimated to be 7.3%. As a result, maintaining a hawkish posture was crucial. However, at the same time, the RBNZ has abandoned growth possibilities in favor of making price stability its top objective.

“The RBNZ Governor’s comments that the hike cycle is very mature and the possibility the Board pays more attention to offshore risks opens a downshift to 25 bps hikes in Feb and Apr’23 taking terminal to 4.50%. Unless there is a destabilizing risk event, the risks to our OCR forecast are to the upside.” economists at TD Securities noted today.

Investor enthusiasm for risk appears to be declining as international tensions rise. The day before, in response to Washington’s decision to provide further military support to Ukraine, the Russian ambassador to the US issued a warning that there was now a larger danger of a direct conflict between Russia and the west.

The ISM service sector PMI survey for September, the ADP private sector employment report and the August goods trade balance data will all be included in the US economic agenda later today. The European Union will formally announce the most recent sanctions on Russia, which include the oil price cap.

The NZD/USD pair managed to jump from the recent consolidation range, but shortly after, the selling brought the kiwi back to that range. therefore, it looks like a false bullish breakout, possibly a bearish reversal pattern.

Another intraday support is expected near 0.5680, and if not held, the next level of defense should be focused near the short-term uptrend line at 0.5620.

The long and medium-term trends are still bearish, thus, rallies are expected to be sold as nothing has really improved in the global macroeconomic and geopolitical picture. 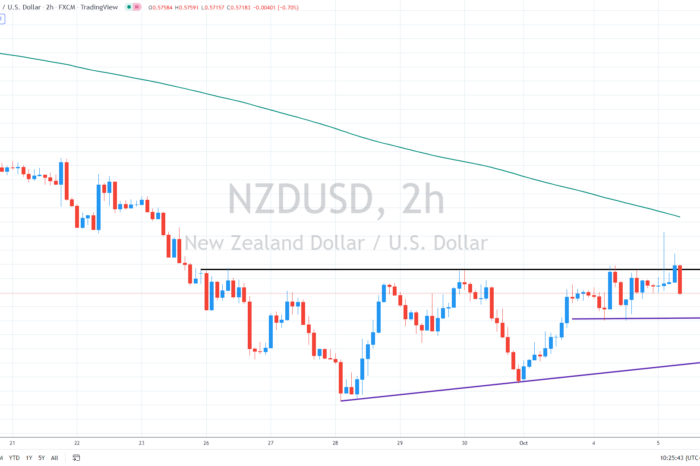