The bearish trend will likely persist, although short-term relief rallies could occur.

The NVIDIA stock price is down 60% off its November 2021 lows, continuing in its bearish trend as high-growth companies came under severe selling pressure.

According to Zachs Equity research team, the highest-performing NVIDIA processors are the A100 and H100, which are utilized in data centers for computing, AI, and data analytics applications. Despite not selling products to clients in Russia, the company’s sales of data center chips in China will suffer severely as a result of the new license requirements.

The company’s (NVIDIA) ability to serve the A100’s current clients and quickly complete the development of H100 would undoubtedly be impacted by the newly imposed limits. Additionally, this could necessitate NVIDIA moving some of its operations outside of China.

The limitations are anticipated to hurt NVIDIA’s operations in China. The firm anticipates sales of the aforementioned chips to bring in $400 million in revenue during the third quarter of fiscal 2023. If Chinese companies choose not to purchase substitute NVIDIA goods, the business warned that it risked losing income.

The most recent limitation is a further setback for NVIDIA, which is already suffering from waning interest in the company’s gaming-related processors. Due to decreased sales across its Gaming and Data Center business divisions, the firm last week announced revenues of $6.7 billion for the second quarter of fiscal 2023, much lower than its prediction of $8.10 billion (+/-2%) made in May 2022.

Revenues for NVIDIA’s gaming division fell 33% year over year as a result of decreased gaming product sell-in, which reflected fewer channel partner sales as a result of macroeconomic headwinds. Despite a 61% increase in revenue year over year for data centers, the business reported that sales fell short of projections owing to persistent supply-chain interruptions and fewer sales to hyper-scale clients in China, who are impacted by the country’s economic situation.

Given the present economic climate, the company provided gloomy revenue projections for the third quarter, estimating that sales would total $5.9 billion (+/- 2%), down almost 17% from the same time last year. Given the most recent US government ban on semiconductor shipments to China, it is quite likely that the firm will publish third-quarter revenues that are well below its August 2022 projection.

The NVIDIA stock seems heavily oversold while it tests key support near $135. The combination of oversold conditions and a brief relief rally could send the price back toward $150.

On the other hand, should the support at $135 fall, larger stop-losses could be hit, possibly sending the price to 2021 lows in the $115 region. 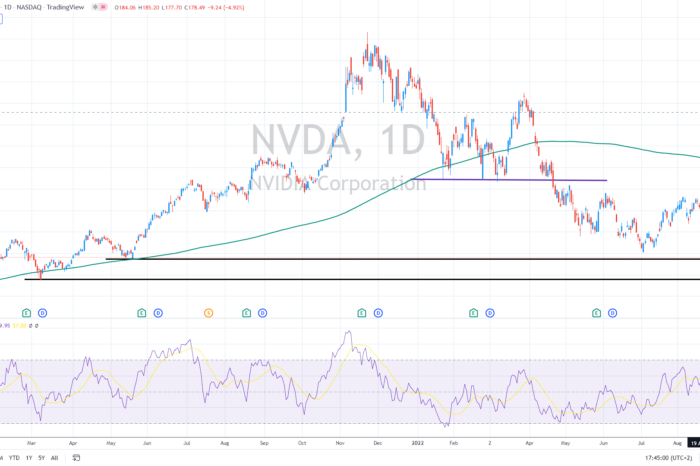