The Nasdaq 100 index roared higher Wednesday and traded more than 3% stronger during the US session as traders rushed into equities following today’s Powell presser.

In a speech on Wednesday, Federal Reserve Chair Jerome Powell said it made sense to “moderate” rate rises as the Fed nears its anticipated peak in benchmark interest rates. This paved the way for a 50-basis point rate increase at the Fed’s December policy meeting.

“It makes sense to moderate the pace of our rate increases as we approach the level of restraint that will be sufficient to bring inflation down,” Powell said in a speech at the Brookings Institution in Washington. “The time for moderating the pace of rate increases may come as soon as the December meeting.”

Powell reaffirmed that the amount by which the Fed raises its benchmark interest rate and the length of time it maintains those levels are more crucial factors than the rate rise speed.

However, he also said that “It will take substantially more evidence to give comfort that inflation is actually declining. By any standard, inflation remains much too high.”

From other macro news, analysts predicted that US pending home sales would fall again in October after plummeting by the most since COVID lockdowns in September. So they did, falling 4.6% MoM (September was revised slightly higher from -10.2% MoM to -8.7% MoM)…

This is the 5th month in a row that sales have decreased, making the YoY reduction of approximately 36% the largest yearly decline ever.

“October was a difficult month for home buyers as they faced 20-year-high mortgage rates,” Lawrence Yun, NAR’s chief economist, said in a statement.

Additionally, the Chicago PMI survey has published a reading of 37.2 (vs. 47.0 forecasts), down to its lowest point since the peak of the COVID lockdowns in 2020. Again, this was below the 25 economists’ lowest estimate.

Earlier today, traders paid attention to the US GDP data, along with the ADP employment report, which failed to spur any volatility in US stocks.

You may also read: Oil on a roll – will it close in green again?

It looks like the current resistance of previous highs near $11,900 will be conquered soon, and the Nasdaq 100 index could then jump toward its 200-day moving average near $12,550 (the blue line). 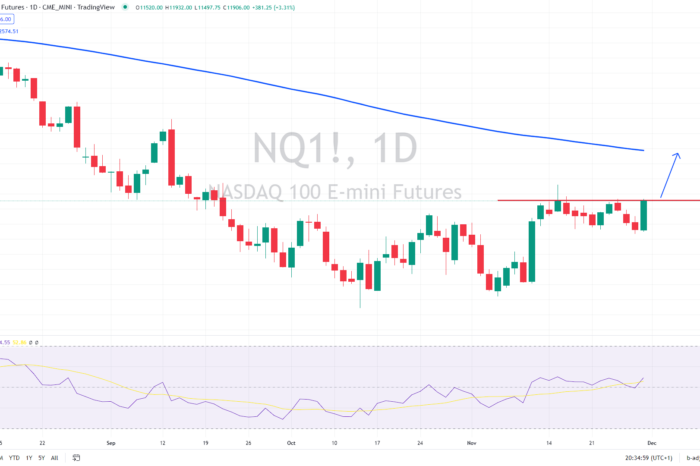