Nasdaq pumps to one-month highs after weak US data

Once again, the bad news is good news for the stock market, pushing it higher after miserable US data.

The tech-heavy Nasdaq 100 index rose more than 2% Tuesday, supported by the miserable US economic data. As of writing, the index traded near 11,650 USD.

The 20-City Composite Home Price Index, which had fallen in July for the first time since 2012, was predicted to decline even more sharply in August (the most recent data available) as rising mortgage rates severely impacted affordability.

The year-on-year increase has been the smallest since February 2021, while the monthly decline has been the worst since March 2009.

“The forceful deceleration in U.S. housing prices that we noted a month ago continued,” Craig J. Lazzara, managing director at S&P Dow Jones Indices, said in a statement.

“Price gains decelerated in every one of our 20 cities. These data show clearly that the growth rate of housing prices peaked in the spring of 2022 and has been declining ever since.”

The highest year-to-date increase in more than 50 years, according to Freddie Mac Deputy Chief Economist Len Kiefer, has been seen in mortgage rates, which have risen by a full percentage point in September and 3.83% overall year-to-date.

According to data from Realtor.com, the typical home buyer will be looking at a monthly mortgage payment of $2,300 at current rates that are close to 7%, or approximately 44% of a household’s take-home earnings.

US consumers are starting to feel the pain

Moreover, analysts predicted that The Conference Board’s headline confidence index would drop in October after an unexpected recovery in the previous two months, and that’s exactly what happened.

The monthly decline in “current conditions” is the largest since December 2021, bringing it to its poorest level since April 2021.

You may also read: Crude oil falls down despite tight production policy

After the bell, earnings reports from Microsoft, Alphabet, and Visa are scheduled. Later this week, reports from other significant mega-cap tech companies such as Meta Platforms, Apple, and Amazon are expected.

The key resistance of 11,670 USD is currently being tested. A further rally toward 12,250 USD could occur if broken to the upside. 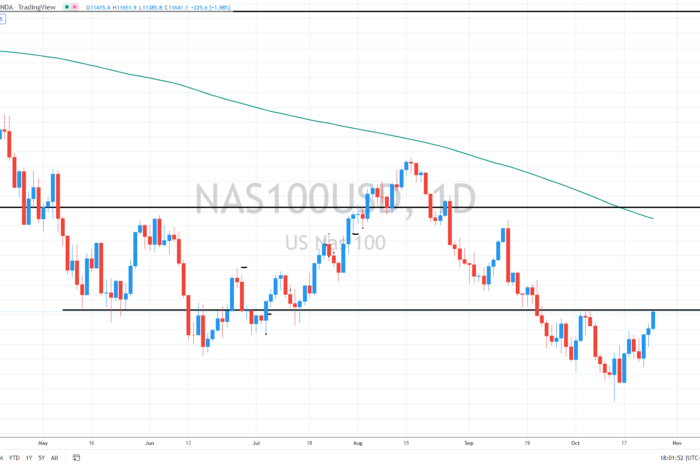