The tech-heavy Nasdaq 100 index traded 1% lower on Wednesday as investors booked some profits from the recent rally. Still, the index has remained above the critical support of $11,740 (so far).

Focus on US data

The Commerce Department said on Wednesday that despite inflationary pressures, Americans spent money on petrol, groceries, and other large-ticket items in October, driving up retail sales by 1.3%. Bloomberg questioned economists who predicted a 1.0% headline gain after the preceding month’s activity was flat.

Investors likely see strong purchasing as a signal to Federal Reserve officials that aggressive rate hikes may continue, which might halt the market’s upward momentum.

“The fundamentals are not supportive of consumer spending, yet retail sales continue to forge ahead. It is tempting to cheer on the “resilience” of the consumer. Still, the staying power of spending gives businesses no incentive to forgo price increases, thereby making the task of getting inflation in check more difficult for policymakers,” analysts at Wells Fargo said after the release.

Moreover, according to a statement released by the US Federal Reserve on Wednesday, industrial production in the US decreased by 0.1% on a monthly basis in October. This report, which came in poorer than the market anticipation of the growth of 0.2%, came after September’s gain of 0.1%.

As per Reuters, John Williams, the president of the New York Federal Reserve, stated on Wednesday that the greatest weapon for addressing risks to financial stability is not monetary policy.

“Price stability is essential for the US economy to function well; central banks around the world are taking strong action to restore price stability. It is important to bolster the resilience of the treasury market,” he added.

In other news, according to Poland’s first assessment, a missile that fell inside its borders on Tuesday was almost certainly the consequence of a Ukrainian air defense missile, a spokesman for the US National Security Council, Adrienne Watson, said on Wednesday.

Breakout has been defended so far

As long as the Nasdaq futures trade above previous swing highs of $17,400, the outlook seems bullish, likely targeting yesterday’s highs in the $11,180 region.

You may also read: Fed has started its 12-week test of digital dollar

On the downside, if the support is broken down, some larger stop-losses could be triggered, possibly leading the price into the $11,400 zone. 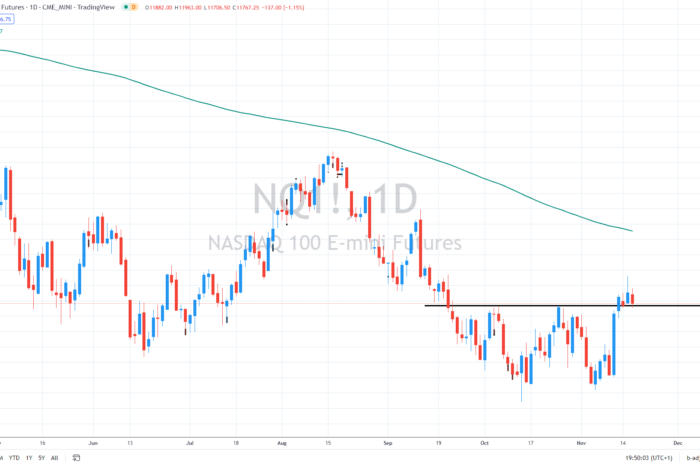