According to reports, Facebook owner Meta (META) is planning extensive layoffs this week that might affect thousands of staff, following the example of rival social media platform Twitter. After the news, Meta stock increased 5.3% to 95.60 USD.

The Wall Street Journal said that the news that “many thousands of workers” may lose their jobs might occur as soon as Wednesday. According to Meta, 87,000 people work there.

Based on the WSJ story, Meta has instructed staff to postpone unnecessary travel starting this week. It would be the company’s 18-year history’s first significant workforce cut.

Meta chose not to respond. However, Chief Executive Mark Zuckerberg stated, “In 2023, we’re going to focus our efforts on a limited number of high-priority growth areas” during the company’s quarterly results call last month.

In addition, he said, “That means some teams will grow meaningfully, but most other teams will stay flat or shrink over the next year. So, in aggregate, we expect to end 2023 as either roughly the same size or even a slightly smaller organization than we are today.”

Furthermore, recall what Mark Zuckerberg said to staff at a gathering of the whole firm at the end of June:

“Realistically, there are probably a bunch of people at the company who shouldn’t be here.”

He appears to have located those people.

Wall Street has been particularly brutal on the IT industry this year; Meta Platforms has lost roughly 70% of its worth so far in 2022.

You can also read: Weekly macro report – Fed is certain about one thing

In addition to increasing usage during the Covid-19 outbreak and a rebranding and refocus at Meta to focus more on augmented and virtual reality, the abrupt decrease comes after more than two years of substantial growth. According to the WSJ, Meta has increased its employment count by more than 42,000 since 2020.

In an open letter to Zuckerberg written last month, Brad Gerstner of Altimeter Capital urged him to implement significant reforms at the business. The letter from Gerstner, the company’s founder and CEO, said that Meta had “drifted into the region of excess” due to having “too many employees, too many ideas, and too little urgency.” “Meta needs to rediscover its mojo,”

Considering its freefall, it is difficult to do any technical analysis for the Meta stock. However, bulls might try to close the massive bearish gap after the last earnings report, thus, implying a potential for a 35% rally over the next quarters.

On the downside, the support should be at the current cycle lows, near 89 USD. 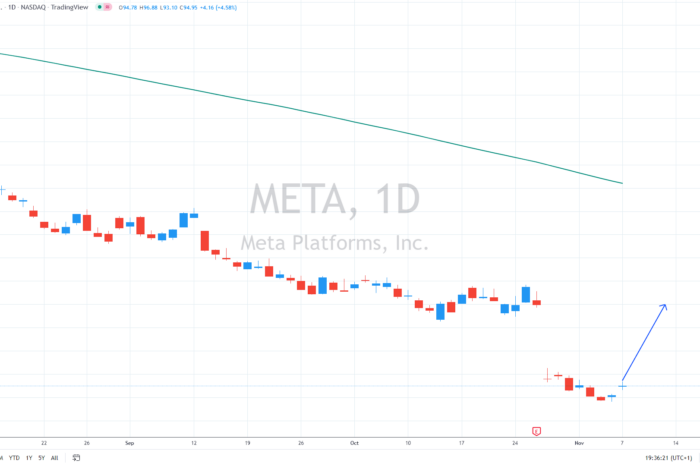