Sam Bankman-Fried's situation is somewhat similar to that of Jon Corzine, with both of them going free while committing fraud.

The fall of FTX brought a lot of attention to the crypto space, calling for regulations as soon as possible. But are they really going to prevent the inevitable? Every economic expansion brings frauds, as cheap money and low interest rates allow sophisticated scammers to use capital to their advantage.

Now everyone knows Sam Bankman-Fried (SBF), the founder of the bankrupt crypto exchange FTX, but not everyone knows about Jon Corzine, who did a similar thing as SBF. But not in the crypto space.

Who is Jon Corzine and what did he do?

His career began at Goldman Sachs. Later Corzine became New Jersey governor and United States senator. He also worked as a financial executive before entering politics in the early 2000s. But most importantly, he served as CEO of MF Global from 2010 until the firm’s demise in 2011.

Related article: Which 5 crypto billionaires lost over $110 billion in 2022?

In March of 2010, MF Global, a multinational futures broker and bond dealer, appointed Corzine as the CEO and Chairman. After suffering massive quarterly losses, MF Global saw its stock price drop by more than half in the last week of October 2011. MF Global declared Chapter 11 bankruptcy on October 31th, 2011, and the company’s stock was halted from trading before the market opened that day. 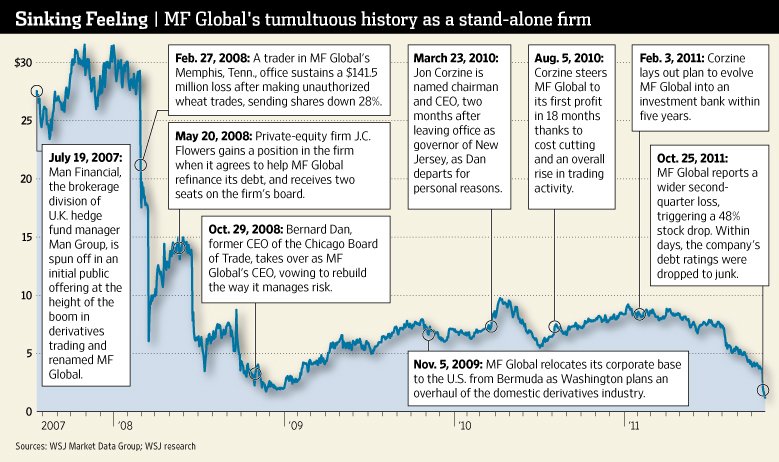 Federal authorities launched their probe into the disappearance of hundreds of millions of dollars in customer funds shortly after. Sounds familiar? When MF Global went under, it was allegedly one of the largest bankruptcies in American history. The same occurred with FTX, one of the most significant collapses in the crypto space.

On December 8th 2011, Corzine was called to testify before a House committee to testify about the disappearance of $1.2 billion from MF Global client accounts.“I simply do not know where the money is, or why the accounts have not been reconciled to date,” he stated.

Corzine claimed to not have any knowledge of the specifics of the movement of the funds due to the large number of transfers that occurred in the final days of trading at MF Global. Furthermore, he claimed he had no knowledge of or involvement in any fraudulent activity involving customer funds.

According to Bloomberg, Congressional investigators cited an internal company e-mail in a memo about a $175 million transfer that was under scrutiny. Corzine’s “innocence” was later proven after initial media reports suggested otherwise. The employee who made the transfer emailed Corzine, explaining that it was a “House Wire,” meaning it came from the company’s own account.

Also read: Money makes us selfish and cold – but why does it happen?

According to a statement released by his office, Corzine never instructed anyone to use customer funds to cover the overdrafts, and never specified which account should be used to do so. Moreover, Corzine was never made aware that customer funds had been diverted to that effect.

Fortunately, it was later reported that MF Global customers would get back all of their money. The fact that every client would be fully reimbursed was music to everyone’s ears. Distributions have been made to thousands of customers at this point, restoring their losses.

In June 2013, the CFTC brought civil charges against Corzine for illegally diverting customer funds to MF’s general company’s expenses. Corzine and the CFTC reached a settlement order on January 5th, 2017, with a requirement to pay a $5 million penalty for his role in the crash of MF Global.

Moreover, Corzine agreed that he would never again be eligible to work for a futures commission merchant or to register with the CFTC in any capacity. So here we have a former CEO who almost lost over a billion dollars to its clients, blowing up a company a multi-billion-dollar company. All he had to pay was $5 million and a promise not to work in the aforementioned spaces while being worth around $350 million.

We see a similar happening again with SBF, who was arrested, but later paid a $250 million bail and got out. SBF mishmashed customers’ funds, used them to buy houses, and did many other malicious acts. Now he’s free to run the world as if nothing happened.

However, many individuals and businesses were affected by the FTX collapse. Tens of billions of dollars were wiped out from the market value. The damage is enormous. And still, these kinds of individuals are “unjailable” for some reason. Moreover, the stock market should have been more regulated than the crypto market, and Corzine still managed to obey the rules. But he is not the only one.

Read more: Rise of internet and social media – what you did not know

Now authorities are eyeing the crypto space with the hope of better regulation and fewer scams. But if Corzine managed to violate regulations with the Securities and Exchange Commission (SEC) functioning for almost a century, it will be possible in crypto as well. Even Bernie Madoff ran a fraud for decades, which resulted in one of the largest Ponzi schemes in history.

Regulations overall are not as effective as they maybe should be. That is why authorities should rather focus on better oversight over markets rather than just trying to impose laws that not everyone follows.

There always was and will be an individual who doesn’t like to follow rules and will not obey them. It happened before, and it will happen again. More regulations won’t change anything – more transparency and thorough check-up will.