WTI Crude oil is in a somewhat similar position to when it cost about $120 at the beginning of the year, implying another selloff may come soon.

The energy crisis caused a massive spike in energy prices, especially oil and gas. While oil is still considered expensive, it is actually falling and is expected to continue this downward movement.

WTI Crude oil peaked at $130 in March in the midst of rising inflation. However, governments were able to slow down inflation by hiking interest rates, stopping energy prices from growing further. Charts show that the break of the first trend line was crucial in determining the market decline. Now crude oil is breaking another trend line.

The current situation is quite similar to the one from a few months ago. Crude oil failed to break resistance, broke the trend line and continued downward. Now there is even another confirmation signal – a moving average (EMA200) – from which the market bounced back down. Now that we know another decline is probable, let’s look at a possible profit target. 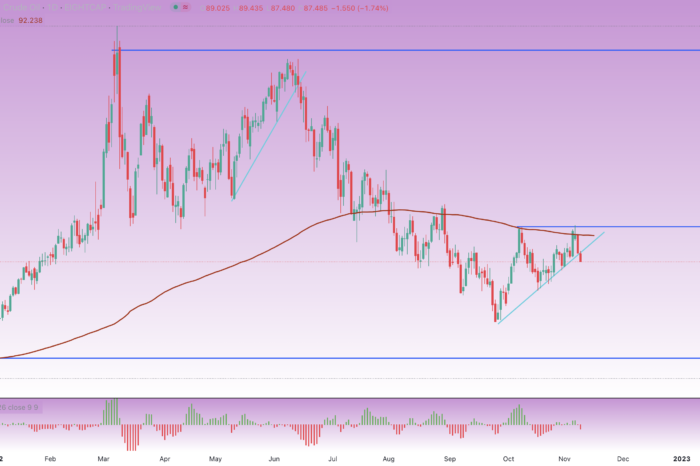 The bull run was massive. Oil prices went literally from $0 to $130 in two years. That bull run is, however, probably over. The oil crisis is being handled, and we could see it heading to a new low. This could probably send the market close to EMA200 at approximately $70.

There is also a huge divergence that will probably be confirmed by the end of the weekly candle. The weekly engulfing pattern also suggests the price might be headed down again. The overall potential for oil is to fall by 20% in the upcoming weeks. 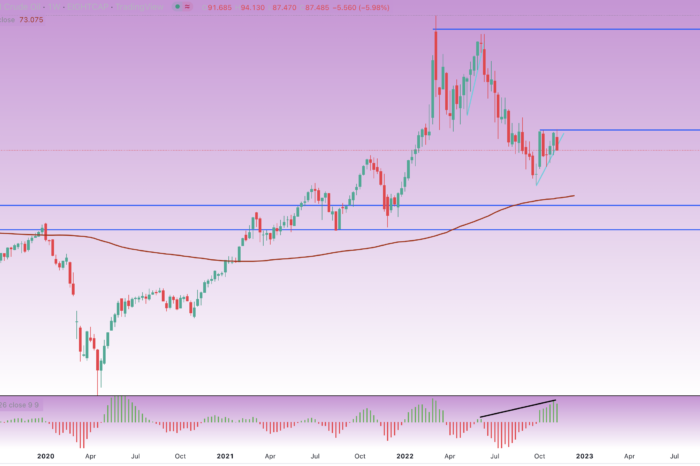 Following a resurgence in Covid cases and fresh lockdowns in China, growing worries about global demand soured the outlook. China, the biggest oil importer in the world, can contribute to another selloff. Many traders follow this market signal as the price dives below $87.

Fears that an aggressive tightening campaign by major central banks in developed economies could pull the world into a recession and reduce oil consumption were exacerbated by uncertainty about China’s outlook. Additionally, US oil stockpiles increased by nearly 5.6 million barrels last week, above forecasts for an increase of 1.1 million barrels.

Even still, supplies around the world are still exceedingly scarce since OPEC+ cut production in November by 2 million barrels per day enhanced by the European Union ready to impose a ban on Russian oil in December.

Moreover, US crude oil stockpiles increased today by 3.9 million barrels as opposed to the 1.36 million barrel increase that the market had anticipated. Given the current situation, all signals point to another selloff in the oil market that clearly signals the end of an energy crisis.