Is gas really that expensive? A look into the energy crisis

The energy crisis caused a massive surge in the price of European natural gas, but this wild ride seems to be over.

European natural gas dropped below 100€ on October 24th for the first time since June, about 70% decrease from the highs of August. This is after fears over shortages in winter eased again.

Moreover, ample supplies of LNG allowed Europe’s gas storage sites to get filled, and EU governments collaborated to tackle the energy crisis. So is the situation really that bad or is the energy crisis almost over?

How it all started

Geopolitics and inflation are to blame for the increase in the price of natural gas. The geopolitical issue is undeniable. Prices have increased since Russia invaded Ukraine, leading to sanctions on Russian oil and natural gas exports.

Related article: Where to invest for a profit during a recession?

Due to Europe’s heavy reliance on Russian gas, the cost of natural gas in Europe has skyrocketed and inflation only accelerated the price growth of gas alongside other commodities. The weather in the United States also caused a surge in gas prices as power generators rely on gas to produce electricity used to cool buildings.

Moreover, the lack of storage brought more troubles as the demand and worry about the additional curtailment of the global energy supply rose sharply. Many of these puzzles contributed to the explosive price increase of natural gas worldwide, but especially in Europe.

How expensive is gas now

After world leaders united in backing urgent steps to contain the energy crisis that has gripped the economy, natural gas prices in Europe fell. The legislators stated they would pursue a framework to control the price of gas used in electricity generation and requested the European Commission to establish a “temporary dynamic price corridor.”

Additionally, they seek to prevent sharp price increases and bargain with sellers using the combined purchasing power of the EU. The price cap is also about to be introduced to prevent the price from getting out of control. The commodities supercycle probably peaked for technical and fundamental reasons.

The recent EIA report revealed that an additional 111 billion cubic feet of natural gas had been added to storage, which was more than anticipated. This production record and decreased weather-driven demand are what is causing the price to continue to decline.

Reduced LNG shipments have also contributed to the bearish momentum, with importer Europe already well-prepared for the next winter. Two years ago, European natural gas was trading at about 13€. One year ago, it rose to 85€ and peaked at 340€ in the end of August of this year. 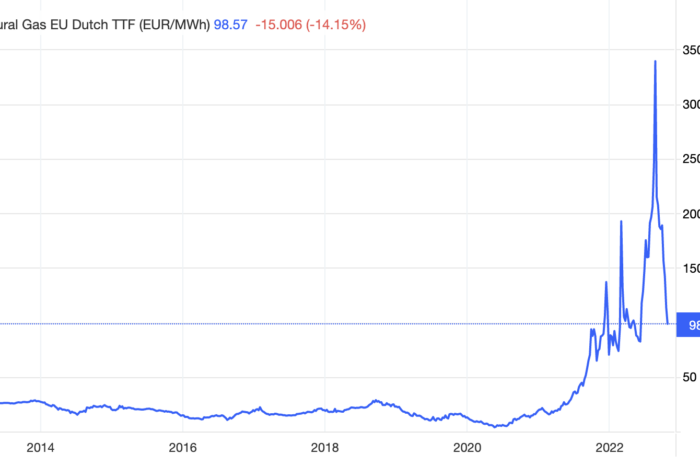 As the European Union tackles the high prices of several commodities and especially focuses on natural gas, its price is projected to continue downward below 100€. Some upward price pullbacks could occur from time to time, but natural gas should return to normal. However, this is only if the conflict between Russia and Ukraine does not escalate further.

While EU natural gas spiked from below 10€ in 2020 to 340€ in the summer of 2022, natural gas in the US did not see such an extraordinary price increase. Its price grew from $2 in 2020 to about $10. However, the price fell by about 50% because of mentioned fundaments. Natural gas formed a double top pattern and has been falling sharply ever since it topped near $10. 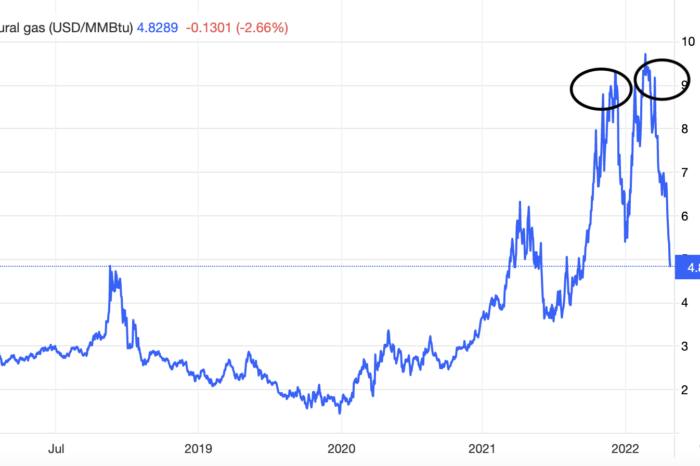 So, is the gas really that expensive? That depends on the location. The US actually doesn’t have expensive natural gas as it is already down by more than 50% and didn’t increase so dramatically. However, the price of natural gas in Europe stays expensive despite its 70% fall because it is still 700% higher than it was two years back.

As the price clearly reached its peak in August, it is expected to fall even more, probably between 50€ and 70€ in the next few months. While this is still considered “expensive,” it is affordable and does not pose such a risk throughout the whole year.