The Pound has failed to book any gains today, erasing all the daily gains achieved after the Bank of England monetary policy decision.

The Bank of England increased interest rates to 2.25% earlier today while announcing that it will continue to “react aggressively, as necessary,” to rising prices. It’s important to note that Ramsden, Haskel, and Mann, three MPC members, voted in favor of a 75 bps. Swati Dhingra, who replaced Michael Saunders as its newest member, demanded a 25 bps.

You may also read: Here are 3 reasons why stocks may continue to dive

The BoE now predicts that inflation will peak at about 11%. After the September meeting, money market futures continue to predict that the BoE would raise rates in the direction of the 3.75% level.

Jonathan Haskel, a policymaker for the Bank of England (BoE), was quoted by Reuters as saying that the central bank was in a challenging situation since the government’s expansionary fiscal policy looked to conflict with the BoE’s attempts to reduce inflation.

“We are in a difficult, uncomfortable position, frankly, because I don’t like being in a situation where you have one institution – namely the independent central bank – at least being portrayed as set against another institution, the elected government,” he said.

Yesterday, the benchmark federal funds rate was raised by the American central bank by 75 basis points to 3.25%, as anticipated, as authorities remained dedicated to reducing inflation down to the targeted level.

The Fed has also raised its inflation projections upward at the same time, and now expects the PCE price index to reach 5.4% this year and 2.8% in 2023. It won’t accomplish the 2% goal until 2024. Growth was downgraded, with the short-term decline being the most significant.

“GBP/USD recently broke the lows of 2020, denoting persistence in the downtrend. That low of 1.1410 is expected to be short-term resistance. The pair is expected to head lower towards next potential supports at projections of 1.1210/1.1160 and 1.1000 representing the descending trend line connecting lows of 2016 and 2020.” analysts at Société Générale provided their technical analysis. 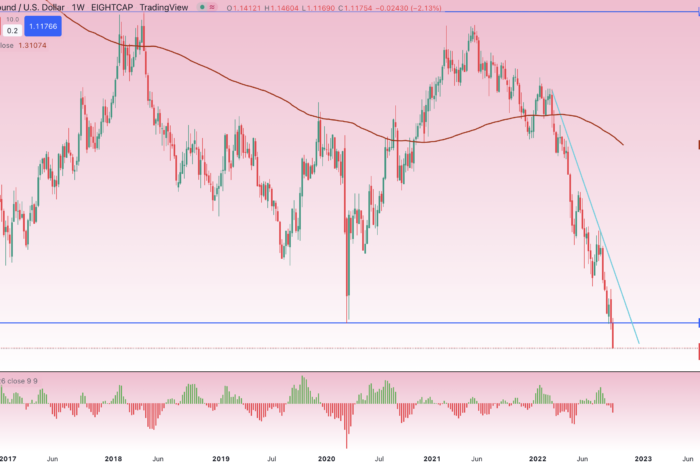