Bears regained control today, with the pair forming a triangle pattern, likely spurring further volatility in the days ahead.

The Pound tumbled on Wednesday, losing half a percent against the USD as the recent relief rally in risk assets is running out of steam. As of writing, the GBP/USD pair changed hands near 1.1250.

The UK Office for National Statistics (ONS) stated on Wednesday that the Consumer Prices Index (CPI) 12-month rate exceeded expectations and came in at 10.1% in September compared to the 9.9% recorded in August. Since 1982, the index has risen to its greatest point ever.

The core inflation rate, which excludes volatile food and energy prices, increased to 6.5% yearly last month from 6.3% in August, above expectations of 6.4%.

Related article: US core inflation rises to 40-year highs: What does it mean?

According to the monthly statistics, the UK’s consumer prices increased by 0.5% in September compared to 0.4% forecasts and 0.5% in August.

The UK Retail Price Index for September exceeded expectations across the board, coming in at 0.7% MoM and 12.6% YoY.

As stated by the ONS, the increase in food costs was the primary factor driving up the CPIH and the CPI. On the other hand, transportation saw the most downward pressure as the cost of used automobiles and gasoline continued to decline.

Susannah Streeter, senior investment and markets analyst at Hargreaves Lansdown, said: “Despite attempts to turn down the heat, the cauldron of hot prices continues to bubble, spitting out yet more problems the UK government has to grapple with amid the ongoing political turmoil.

“We still see renewed GBP weakness ahead with a danger of a rush to retrieve investor credibility going too far and worsening notably the already grim economic outlook,” economists at MUFG Bank do not expect further improvement in confidence from here.

As for the USD, Neel Kashkari, president of the Minneapolis Federal Reserve Bank, stated earlier in the day that he was “not ready to proclaim a stop in rate rises” unless he saw “some persuasive evidence that core inflation has at least peaked.”

With this, the CME’s FedWatch Tool indicates that markets are pricing in a roughly 95% possibility of the Fed raising interest rates by 75 basis points in November.

Technically speaking, the GBP/USD pair has formed a very nice triangle pattern, with the price testing the upper bound of the triangle yesterday. Bears reappeared again, sending the cable lower.

With this in mind, we might see some meaningful momentum when the price breaks from the triangle. 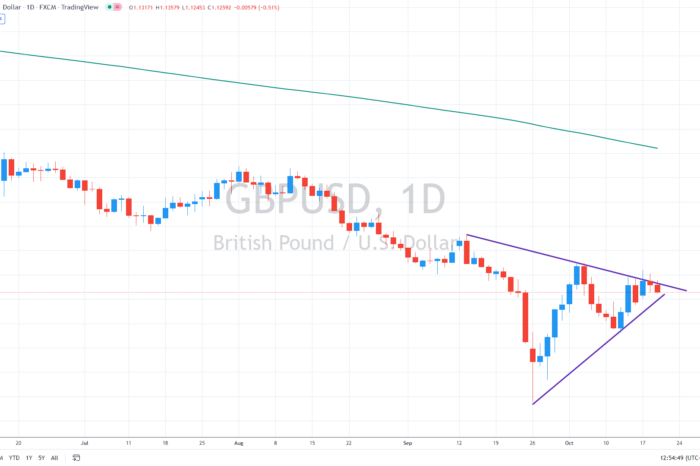