This morning, the Pound traded lower against the US Dollar after data showed that the UK economy bounced back strongly in January.

Sterling moved lower on Friday as the USD remained bid amid the ongoing conflict in Ukraine and rising US yields.

Earlier today, data showed that the UK economy bounced back strongly in January after taking a hit from the Omicron variant and Plan B restrictions.

The Office for National Statistics showed that GDP grew 0.8% after contracting by 0.2% in December, well above expectations of 0.1% growth. This leaves GDP 0.8% above pre-pandemic February 2020 levels.

Darren Morgan, ONS director of economic statistics, said: “All sectors grew in January with some industries that were hit particularly hard in December now performing well, including wholesaling, retailing, restaurants, and takeaways. Computer programming and film and television production also had an excellent start to the year.

“While supply chain issues persisted in certain sectors, output in both construction and manufacturing grew for the third month running.”

However, Paul Dales, the chief UK economist at Capital Economics, said the rebound from Omicron might be as good as it gets this year.

“GDP in February will probably be fairly good too. But the cost of living crisis and the influence of the war in Ukraine probably means this is as good as it gets for the year,” he said.

Additionally, given the soaring inflation worldwide, the Bank of England will likely raise interest rates further, with the next hike on Thursday (probably by 25bps from 0.50% to 0.75%).

Furthermore, industrial production jumped notably in January from 0.4% to 2.3% year-on-year, with the monthly change more than doubling to 0.7% from 0.3% previously. Manufacturing production also exceeded expectations, accelerating from 1.3% to 3.6% year-on-year and 0.8% monthly.

Despite some positive data, the Pound remained muted and traded somewhat lower on the day.

Later today, the University of Michigan’s preliminary Consumer Sentiment Index for March will be released, expected to decline slightly from 62.8 to 61.4. However, considering the ongoing rise in inflation, Ukraine war, and declines in stocks, the actual number could be far worse.

The Pound dropped below December lows at 1.3160, confirming the bearish bias. As long as it trades below that level, we could see further declines, targeting the psychological 1.30 level.

However, the daily chart now seems oversold, implying a possible bounce, especially if there are positive developments in the Ukraine-Russia conflict. 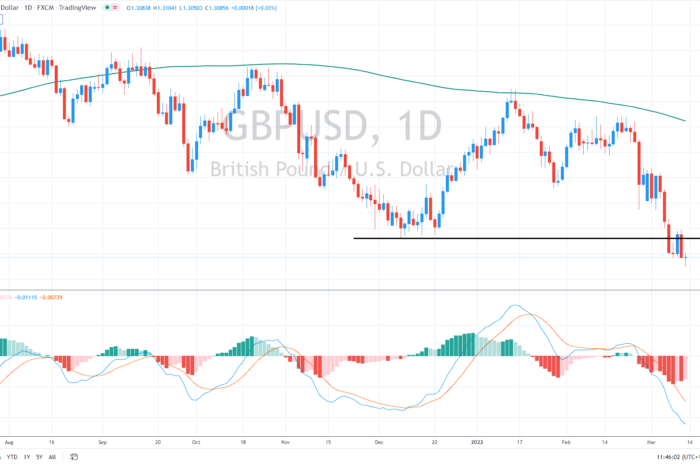