GBP/USD jumps to 1.23 amid USD weakness

The Bank of England has decided to raise the Bank Rate by 25 basis points to 1.25%. The central bank declared that inflation is set to peak at an alarming 11 percent by the end of the year.

The Pound has managed a brutal bullish reversal today, as the USD has come under sudden selling pressure, pushing the pair toward the 1.23 level.

Earlier today, the Bank of England’s MPC decided to raise the Bank Rate by 25 basis points to 1.25% by a 6-3 majority. As a result of the BoE action, GBP has initially retreated versus both EUR and USD.

Shortly after that, the USD has started to drop significantly, leading to an explosive move of more than 200pips higher in the GBP/USD pair, sending it from daily lows of 1.2045 to daily highs at 1.2280.

The central bank declared in its statement that, if required, it will combat inflation “forcefully.” Then, in response to the question of what level of inflation would warrant a more significant raise, they stated that they anticipate inflation to peak at an alarming 11 percent by year’s end, an increase from its last 10 percent.

You can also read: Fed fights inflation and raises interest rates by 0.75%

When set against that sort of narrative, and given what the Federal Reserve did last night, you would have expected to see a much more forceful response than the 25bps the Bank of England delivered today,” Michael Hewson, Chief Market Analyst at CMC Markets said after the BoE meeting.

Housing starts crashed 14.4% month over month in their biggest drop in housing starts since the government shut the economy down in April 2020. At the same time, building permits plunged 7.0% monthly.

Moreover, at 229,000 this week, the number of Americans requesting their first round of unemployment benefits remained nearly unchanged (vs. an upwardly revised 232,000 last week). Continuing claims ticked higher to 1.312 million. Initial claims are moving considerably higher, but continuing claims are trending down as the labor market clearly is turning.

Last but not least, the Philly Fed’s business barometer had a sharp decline in June (from +2.6 to -3.3), mainly falling short of forecasts for a modest recovery to +5.0. Since the COVID lockdowns in 2020, this is the first contraction in the Philly Fed index.

So far, the Pound has remained above the critical 1.20 level. However, with today’s bullish reversal and oversold conditions, we might see a relief rally toward 1.2420.

Alternatively, the support stands at today’s lows at 1.2060 and the psychological level at 1.20. 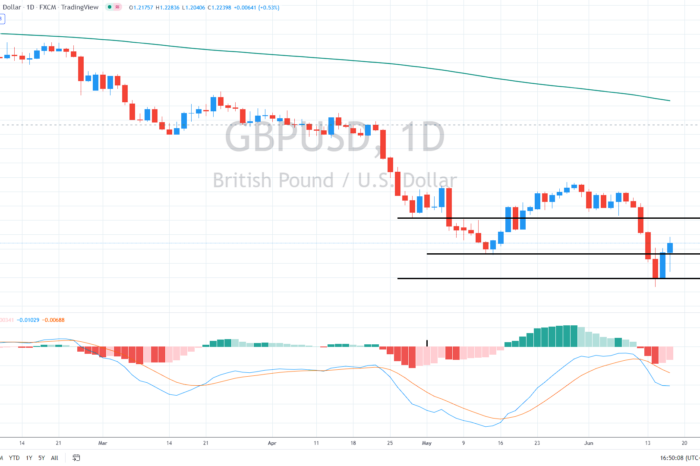