GBP/USD flirts with 1.30 after UK data

This morning, UK data showed that the economy grew at a slower pace in February, sending the GBP to the 1.30 threshold.

The USD continued to dominate on Monday, pushing the GBP/USD pair to the psychological level of 1.30 as US yields remain in a steep uptrend.

Data released earlier today by the Office for National Statistics showed that economic growth slowed more than expected in February. The economic output – GDP – rose just 0.1% monthly, down from 0.8% in January and below expectations of 0.3%. That left the economy 1.5% above its pre-coronavirus pandemic level in February 2020.

The services sector grew by 0.2% and was the main contributor to February’s GDP growth. However, this was partially offset by production, which fell by 0.6%, and construction, which dipped by 0.1%.

Susannah Streeter, senior investment and markets analyst at Hargreaves Lansdown, said: “It’s little wonder the economy overall is showing signs of stalling from its remarkable pandemic recovery, given the sense of foreboding which arose from mid-February as troops amassed on the Ukraine border and then the commodity shock unleashed by the invasion hit sentiment.

Additionally, the UK manufacturing production for February slowed to 3.6% from 5.3% year-on-year but declined more than expected monthly – from 0.9% to -0.4%. Moreover, industrial production had a similar pattern – yearly it fell from 3% to 1.6%, while monthly it decreased more notably to -0.6% from 0.7% in January.

Regarding the Ukraine war, White House national security adviser Jake Sullivan said on Sunday that Ukrainian forces were able to push back Russian troops successfully so that they were forced to retreat and regroup.

The theme from the recent weeks is still the same – traders are selling bonds, pushing their yields higher in anticipation of more inflation and more rate hikes by central banks.

Technically speaking, the Pound remains in a steep downtrend, limited by the downward trend line, currently near 1.3080. However, the medium-term trend seems bearish as long as the GBP/USD pair remains below. A break above the trend line could lead to a relief rally, targeting the strong resistance at 1.3180. 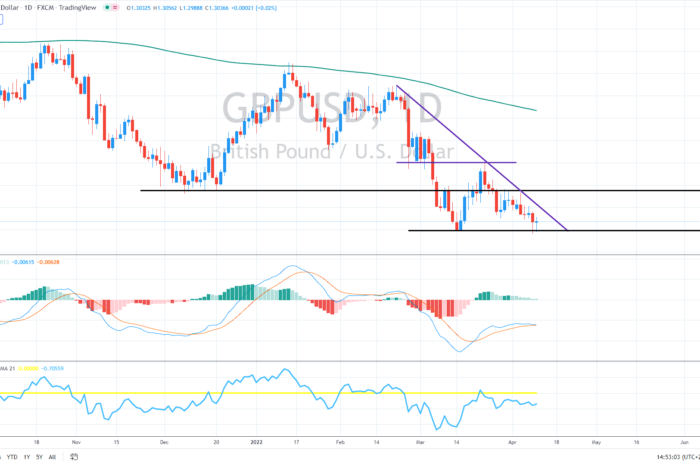