The positive sentiment continued today, leading to some solid gains for the British Pound.

Sterling pushed to new swing highs as the USD came under selling pressure against most of its major peers, pushing the GBP/USD pair to 1.3250 head of the US session.

Earlier today, the Office for National Statistics data showed that government borrowing fell in February. The gap between spending and income came in at 13.1 billion GBP, down 2.4 billion from a year ago, marking the second-highest borrowing figure for February since records began in 1993. This was above expectations of 8.5 billion GBP and the Office for Budget Responsibility’s forecast of 8.0 billion GBP.

However, the data also showed that borrowing is now 25.9 billion GBP lower than the OBR expected for the year and less than half of what was recorded last year, at 138.4 billion GBP.

Compared with February 2020, borrowing was up 12.8 billion GBP. before the pandemic hit

The data showed that interest payment on government debt surged 52.7% from a year earlier to a record 8.2 billion GBP last month amid soaring inflation.

The Bank of England will likely continue raising interest rates this year as inflation is crippling the British economy.

Still, the Fed will likely hike interest rates 6-7 times this year, and the QE is about to end. Hawkish expectations are pushing US yields sharply higher – bringing the 2-year to 2.2% and the 10-year yield to 2.35%, new cycle highs.

In his Monday’s speech, Fed chair Jay Powell sounded the alarm on inflation, saying it’s ‘much too high’ and opening the door to more aggressive rate hikes. “We will take the necessary steps to ensure a return to price stability,” he said. “In particular, if we conclude that it is appropriate to move more aggressively by raising the federal funds rate by more than 25 basis points at a meeting or meetings, we will do so. And if we determine that we need to tighten beyond common measures of neutral and into a more restrictive stance, we will do that as well.”

Technically speaking, today’s jump above the 1.3180/1.32 resistance could open the doors for another leg higher, targeting the 1.33 level now. Additionally, the MACD indicator sent a bullish signal yesterday, strengthening the current bounce.
Alternatively, failure to stay above 1.32 could lead to some profit-taking, probably lowering the pair to 1.31. 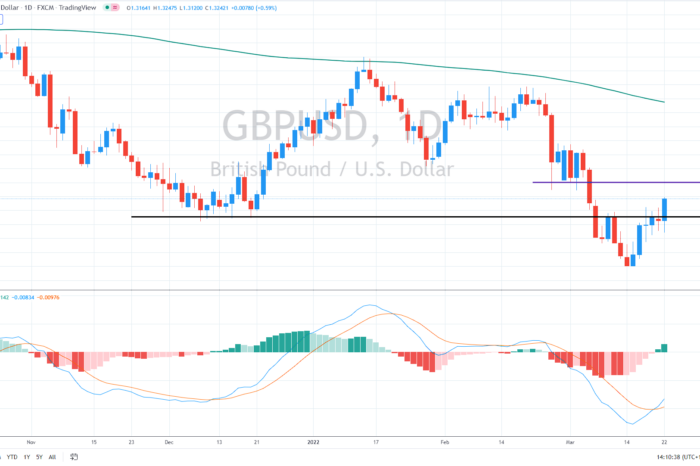