GBP/USD below 1.25 as dollar accelerates again

Sterling fell another half a percent on Monday, pushing the GBP/USD pair below the 1.25 threshold, as USD bulls reappeared ahead of this week’s Fed meeting.

Mixed signals ahead of BoE meeting

The Bank of England will publish its monetary policy decision on Thursday. It is likely to raise interest rates by 25 basis points to 1.00%. Analysts at Danske Bank also anticipate the central bank to raise rates by 25 basis points, in line with mainstream and market expectations, although they caution that the focus will be on the forward guidance rather than the rate rise itself.

“We expect the Bank of England to stick to its more dovish signals, although higher-than-projected inflation and rising inflation expectations increase the probability of the BoE turning more hawkish once again.”

You may also like: Oil gains fifth month in a row despite China´s Covid surge

At the same time, the Federal Reserve’s next monetary policy decision will be carefully monitored in the coming days, with Fed Chair Jerome Powell set to announce his latest policy statement and host a news conference Wednesday afternoon. Market participants expect the Fed to raise rates by 50 basis points to the range of 0.75 – 1.00%, the first such move since 2000.

The Fed is also anticipated to announce that it will begin selling bonds off of its 9 trillion USD balance, the process known as quantitative tightening.

In other news, the US manufacturing ISM unexpectedly fell in April, printing 55.4, against expectations of 57.6 and 57.1 previously. Moreover, the employment index dropped more than expected from 56.3 to 50.9, and prices paid aka. inflation gauge remained elevated above 80.0.

No bottom in sight?

It looks like the selling pressure can sustain this week, although traders will surely be cautious heading into the double central bank combo.

On the other hand, the short-term resistance is spotted at 1.26. Should the Pound jump above that level, we might see a short-squeeze rally to 1.28.

Considering the recent bearish pressure, the pair looks heavily oversold, likely leading to a small relief rally as mentioned above. 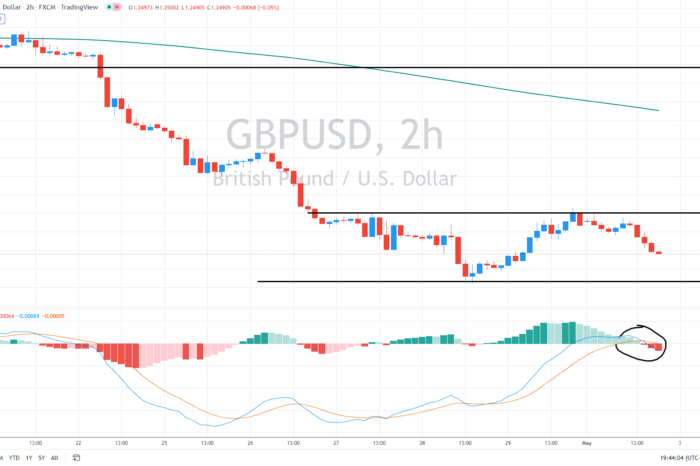