This morning, UK GDP numbers came out better than expected but failed to provide any support for the FTSE 100 index.

The Footsie index traded without any significant change on Thursday as the bullish momentum wanes, with stocks poised for some profit-taking from the recent rally.

Earlier today, the Office for National Statistics showed that UK GDP grew 6.6% annualized in the fourth quarter of 2021, up from 6.5% in the initial release. The quarterly economic output improved from 1.0% to 1.3%. At the same time, the current account deficit narrowed sharply to 7.3 billion GBP, down from a deficit of 28.91 billion GBP in the third quarter.

Moreover, total business investment also came out better than expected. Lastly, the Nationwide housing prices index, which shows the value of the houses prices in the UK and indicates current movements in the housing market, accelerated further to 14.3% year-on-year March, higher than the 12.6% scored in February.

The market reaction was mild, both in the GBP/USD pair and the FTSE 100 index, as both instruments remained unchanged on the day during the London session.

You may also like: Does TESLA have a competitive advantage?

In the latest developments surrounding the Russia-Ukraine conflict, a Kremlin spokesperson said that they had not noticed anything that looks like a breakthrough in negotiations. Moreover, an adviser to Ukraine’s President noted that Russia is transferring forces from Kyiv to encircle troops and launch attacks in the eastern part of the country.

Later today, the usual Thursday’s jobless claims are due, along with the US personal spending and income data. But more importantly, the Fed’s preferred inflation gauge, the PCE Price Index, will be released for February. According to this measure, inflation is expected to continue surging, likely printing 6.7% year-on-year, up from 6.1% in January. In addition, the core PCE inflation is seen rising from 5.2% to 5.5%.

Technically speaking, the index looks overbought and overextended, considering the recent steep rally in global stocks. However, the short-term outlook seems bullish as long as it remains above the 7,500 GBP threshold.

Another significant support could be found at 7,400 GBP, where previous highs are converged with lows. If the index stays above it, the medium-term trend also appears bullish.

On the upside, the target for bulls is expected to be at 7,600 GBP, followed by the current cycle highs at 7,700 GBP. 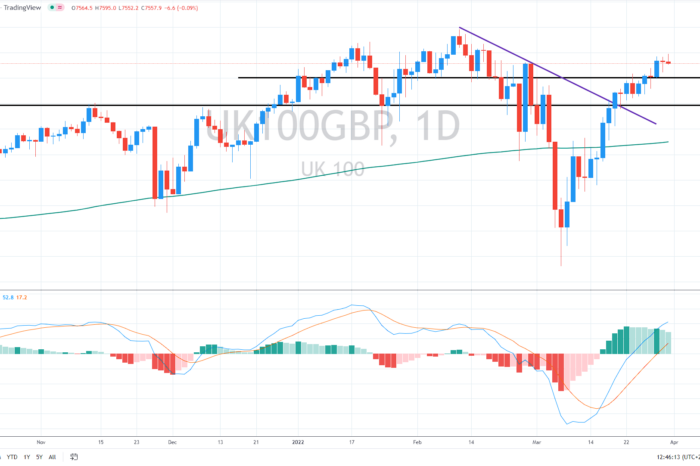