This week's UK inflation data for February showed that inflation rose to the highest reading since March 1992.

The FTSE 100 index, also known as the Footsie, traded half a percent higher on Thursday, trying to attack the psychological level of 7,500 GBP.

Yesterday’s inflation numbers for February brought another upside surprise as the headline CPI number rose more than expected, printing 6.2% yearly, up from 5.5% previously (and 5.9% forecast), marking the highest inflation reading since March 1992, when inflation was 7.1%. In addition, the core CPI also accelerated faster than thought, rising to 5.2% from 4.4% in January.

Keep in mind that these values are still not impacted by the recent surge in all commodities due to the war in Ukraine.

“Inflation rose steeply in February as prices increased for a wide range of goods and services, for products as diverse as food to toys and games,” said Grant Fitzner, chief economist at the Office for National Statistics.

From other macro news, strong growth in house prices continued at the start of 2022, with official data released on Wednesday showing a near-10% jump in prices in January.

According to the Office for National Statistics, UK average house prices increased 9.6% over the year in January, down from 10% in December.

You may also like: Russia is no longer the number one supplier of oil to China

Today’s data showed that the UK manufacturing PMI declined more than expected in March, dropping to 55.5 from 58 in February. On the other hand, the services sector improved slightly to 61 from 60.5 previously.

During the US session, the usual Thursday’s jobless claims are due, along with US current account deficit, which is expected to widen again. Additionally, the US durable goods orders are on the agenda, with investors forecasting a notable monthly decline.

Volatility will likely remain elevated as investors pay attention to the developments in Ukraine, along with rising interest rates and inflation pressure.

The short-term outlook appears positive as long as the index trades above previous highs and lows in the 7,400 GBP area. However, the index could be overbought, following the vital 10% rally off March lows. The next target for bulls is at 7,500 GBP, with the medium-term resistance in the 7,600 GBP area. 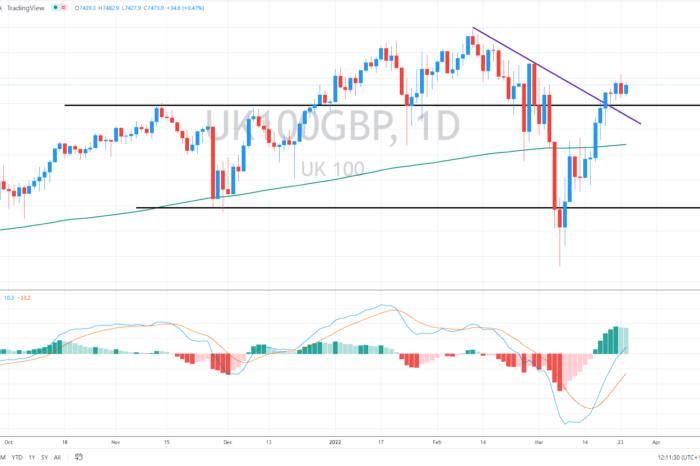