FTSE 100 touches record highs – where is the top?

As the US stock market is closed in observance of Martin Luther King Jr. Day, trading volumes are lower on Monday. Nevertheless, the UK 100 index managed to score some small gains today.

With British consumers stretching their spending muscles throughout the holiday season and the nation appearing less likely to have entered a recession in 2022, confidence has been sweeping over the London market.

Investors seem to have fallen again in love with UK assets following a challenging stretch when the FTSE 100 lagged behind other global indices. As investors anticipate China’s reopening, confidence has increased, benefiting stocks. Stronger-than-anticipated consumer demand has supported the retail, travel, and hospitality industries while banks continue to ride the wave of rising interest rates.

One of the biggest winners in the FTSE 100 index has been Marks & Spencer, trading more than 20% higher year-to-date. The company said on Monday that it would invest just under half a billion pounds and launch a series of new shops as part of a larger effort to revamp existing sites in the wake of good Christmas sales.

M&S stated in a statement that the £480 million investment would result in the creation of 3,400 new employees across the United Kingdom. The firm has announced intentions to establish 20 more facilities during its fiscal year 2023-2024, featuring outlets in Leeds, Liverpool, Manchester, and Birmingham.

You may also like: Focus on central banks: BoE will hike rates despite a recession

Following two years of Covid interruptions, M&S’ share of the UK apparel and homewares market reached its highest point in seven years due to strong demand for formalwear and party clothes over the Christmas season from consumers keen to enjoy the holidays.

This was in stark contrast to prior statistics for the clothes and homewares division of M&S, which had seen annual revenue declines from 2011 to 2020.

The current all-time highs stand at £7,900, reached in 2018. As previously stated, the British index has managed to outperform other equity indices recently, pushing to record highs, while other indices have been trending lower.

Therefore, if the index jumps above £7,900, it might quickly run toward the psychological level of £8,000. Sentiment remains positive; thus, more gains are expected over the near term. 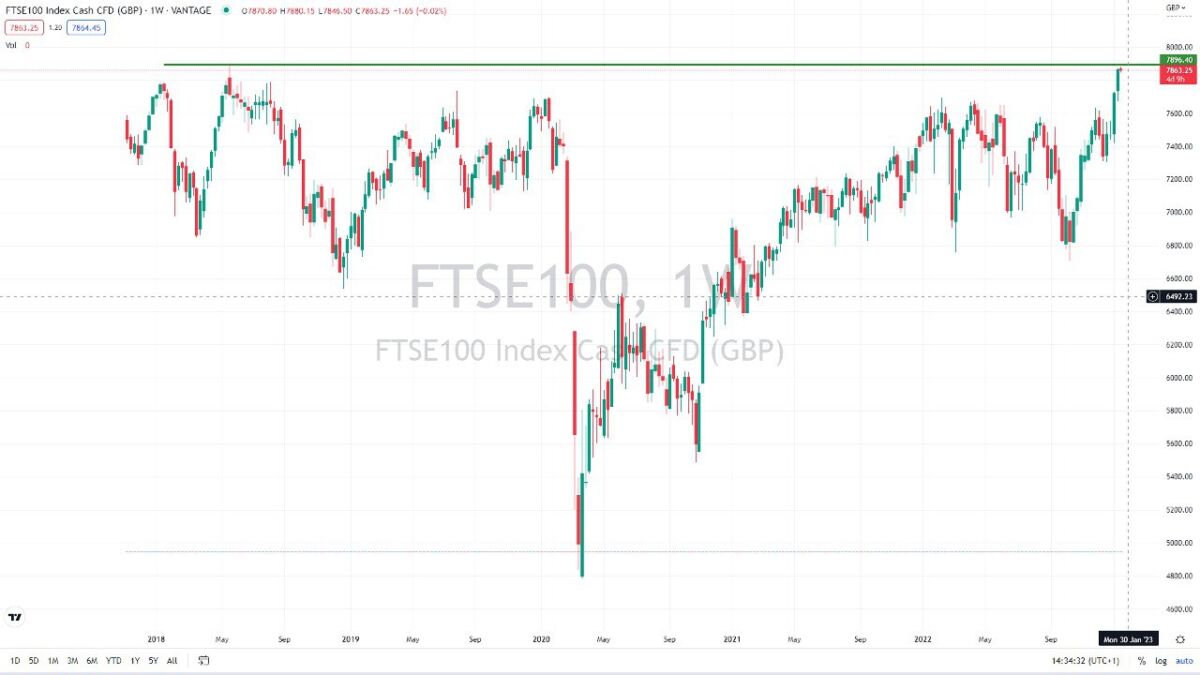