In a rather volatile trading session, the Kiwi declined sharply, despite a 50 bps rate hike by the central bank.

One would expect that after a 50 bps rate hike, the currency would strengthen. One would be mistaken as today’s event has shown us. The NZD/USD pair, also known as the Kiwi, was down 1%, falling to one-month lows, despite a rather surprising rate hike by the RBNZ.

The New Zealand central bank raised interest rates by 0.5% for the first time since 2000 to curb soaring inflation. Investors had expected a 0.25% rate hike. This step marked the fourth consecutive rate increase from the Reserve Bank of New Zealand. However, the outlook was not as hawkish as hoped for, prompting a sell-off after the initial rally in the NZD/USD pair.

Of concern to the RBNZ, the monthly food price index was released yesterday and printed at 0.7% for the month of March. That gave an annual rate of 7.4% for food inflation at the retail level. Additionally, the inflation rate in New Zealand was last recorded at 5.9% for the fourth quarter of 2021. The next CPI release is scheduled for release next Wednesday – it will show the inflation rate for the first quarter of 2022.

This data may have been the impetus for the 50bp hike instead of the expected 25bp increase.

You may also read: Oil back above 100 dollars

Yesterday’s US CPI showed another acceleration to 8.5% yearly, up from 7.9% previously. However, the core CPI remained “stable” and ticked higher a notch to 6.5%. As a result, the USD fell, while stocks and bonds gained in the initial reaction; however, markets reversed those moves shortly after.

Following the CPI release, Fed Governor Lael Brainard’s comments reaffirmed market expectations for a more aggressive policy tightening by the Fed. In fact, Brainard said that the Fed will proceed with a series of interest rate hikes, as well as an effort to trim its balance sheet.

Today’s US PPI is expected to continue rising, likely printing 10.5% year on year (up from 10% previously), while the core indicator is projected to stay at 8.4%.

The Kiwi has failed spectacularly at the 200-day moving average (the green line), leading to a large bearish engulfing bar pattern, likely causing further losses in the following days.

Moreover, the pair has also dropped below the essential uptrend line from February and March lows, ending the medium-term uptrend. Thus, it looks like the market will head lower in the near future. 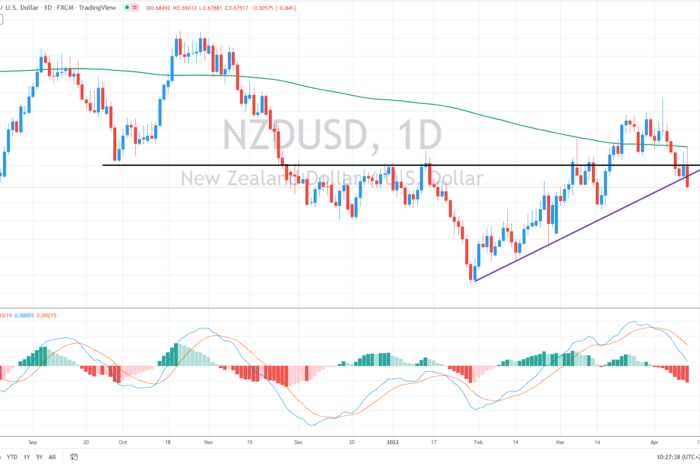