The threat of an "imminent" invasion of Ukraine might be over for now.

Risk assets plunged during the London session as the geopolitical conflict in Eastern Europe continued to develop; however, some ray of hope came from Russia ahead of US trading hours.

Earlier today, Russian foreign minister Sergey Lavrov addressed the press alongside Putin, easing investor nerves of an “imminent” invasion (as the US has kept saying for a couple of weeks now).

Initially, Lavrov said NATO is trying to dictate rules in Europe, and Russia is not satisfied with the US view on the alliance’s expansion. He then added that Russia’s proposals should be considered as a whole.

However, shortly after, Lavrov said he still supports continuing diplomatic talks with the West in response to whether “there was a chance for agreement” on critical issues. He can see a way to move forward with talks. To that proposal, Putin responded, “all right,” sending all risk assets sharply higher.

US equities erased their daily losses, while US bonds spiked higher again, pushing the 10-year yield back to 2%. At the same time, the 2-year yield rose toward 1.6%.

The NZD/USD pair also reacted similarly, rallying off the daily lows as sentiment might improve heading into the US session. However, it remained half a percent weaker on the day.

“Markets are continuing their move lower as investors grapple with a growing number of unknowns in the short term,” said Marcus Morris-Eyton, a portfolio manager at Allianz Global Investors. “While the news flow surrounding Russia and Ukraine appears increasingly worrying, in reality, any outcome and the impact are close to impossible to forecast.”

Later today, Federal Reserve Bank of St. Louis President James Bullard will discuss monetary policy in an interview conducted by CNBC. His remarks will be closely watched as he advocates a 50bps rate hike in March, along with other 50 bps of rate hikes by July.

Bears are in control (for now)

It looks like the recent rally ended exactly at previous lows (now significant resistance) at 0.67. So as long as the Kiwi trades below that level, the medium-term downtrend remains intact, with a possible drop to 0.6540, where the current cycle lows are seen.

If tensions in Ukraine ease, traders might start focusing on US yields/interest rates again, likely supporting the USD over NZD. 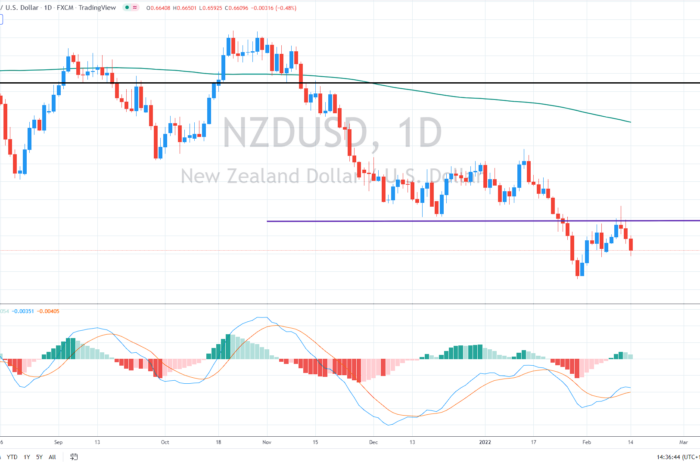