EUR/USD pushes toward 1.12 as sentiment improves

This week, the euro has been supported by a de-escalation of the USD, as news that Russia would scale back military operations in eastern Ukraine helped to underpin the USD.

This week, traders bought the single currency, pushing the pair more than 150 pips higher, hitting one-month highs at 1.1150 as profit-taking from the recent USD rally helped spur a short-squeeze rally.

“Russian forces are being redeployed towards eastern Ukraine, it seems, which suggests that the attempt to overrun the whole country, or at least seize the capital, has been halted for the time being,” said IG chief market analyst Chris Beauchamp.

It was reported earlier in the afternoon that Russia would “dramatically” scale back military operations near the Ukrainian capital of Kyiv.

Alexander Fomin, Russia’s deputy minister of defense, said that to “increase mutual trust, and create the necessary conditions for future negotiations to agree and sign a peace deal with Ukraine,” Moscow would “dramatically reduce military activities in the direction of Kyiv and Chernihiv, several times over,” according to Russian news agency Tass.

It looked like the first significant concession Moscow had made since Russia invaded at the end of February.

Reuters reported that Ukrainian negotiators confirmed they had proposed that Ukraine would adopt neutral status in exchange for security guarantees.

“These proposals will be considered shortly, reported to the president, and our response will be given,” said Russia’s chief negotiator Vladimir Medinsky.

Turkey’s foreign affairs minister, Mevlut Cavusoglu, who mediated at the peace talks, said significant progress had been made.

Also read: Better times are dawning for Wheat and Corn

On the macro data front, the euro zone’s services sentiment improved in March, printing 14.4, up from 12.9 in February. On the other hand, industrial confidence declined from 14.1 to 10.4, as did the economic sentiment indicator, from 113.9 to 108.5.

Later in the day, the US ADP employment report for March is due, expected to show 455,000 new jobs, slightly lower than 475,000 in February. Lastly, the Q1 US GDP revision will be released, but no changes are expected, and the economic growth should stay at 7.0%.

The euro is marching toward the key selling zone in the 1.180-1.12 area. However, if the pair jumps above that level, the medium-term outlook could change to bullish, targeting previous highs and the 200-day average in the vicinity of 1.15.

Alternatively, failure to stay above 1.11 could lead to further losses toward 1.09. 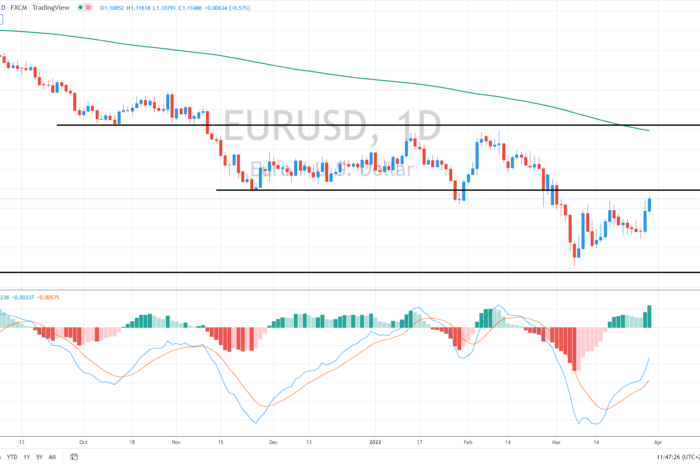